May 13: General cargo ship CATHY JO, reported NUC on May 12, suffered engine failure following fire in engine room, early May 12 in Bay of Biscay. MRCC Corsen, France, was supervising salvage, and sent technicians and fire team to drifting ship by helicopter. Fire was extinguished, but ship was in need of towage. SAR ship ABEILLE BOURBON (IMO 9308687) was contracted for towage, the ship arrived at Brest early May 13, was berthed at around 0330 UTC. At least part of towage distance was covered by CATHY JO under own power. The ship with 5400 tons of soda is en route from Turkey to Poland.
May 12: Gen cargo CATHY JO, IMO 9419278 – NUC since late May 11 or early May 12, from Turkey to Poland, ETA May 16.
General cargo ship CATHY JO, IMO 9419278, dwt 6000, built 2008, flag Curacao. 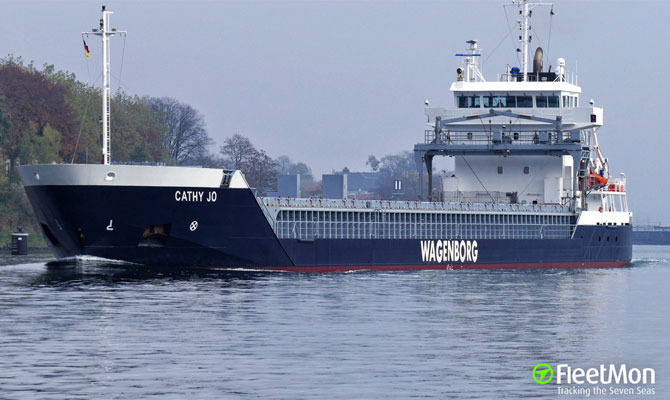