Let’s welcome a new circus show, soon to be staged – a New Anti-Corruption Agenda of the IMO. The IMO will now work on a guidance document to address maritime corruption. This is expected to be completed by 2021. https://www.maritime-executive.com/article/imo-sets-new-anti-corruption-agenda

The more regulations we have, the more bodies and officials we need to implement them and control their fulfillment. The more power bureaucrats have, the more is the corruption. With each new regulation, we’re increasing feeding grounds for corruption.
There’re two kinds of corruption – one’s individual, personal, and as such, criminal and punishable, another one is corruption of the State. It is secret only for maritime organizations, that some States unofficially oblige responsible bodies to fine the ships whenever possible, on whatever doubtful pretext. The States just take it as a new, however small, source of income.

What are the main sources of new regulations, laws, and restrictions? Why, but of course, sources of new regulations are all those who’re controlling their fulfillment, national and international bodies responsible for ships safety and security. Not to mention a bunch of new-comers, eager to grab their bite of the pie, like one known-to-all trade union, with infamous MLC as a deadly weapon in conquering labor market; or NGOs.
A new source of corruption is meanwhile, looming on the horizon, a devastating hurricane, dwarfing all other sources combined. It’s of course, IMO’s restrictions on CO2 output, starting Jan 1 2020. Nobody knows what will be the results – negative results of course, there are no positive outcomes in it, and can’t be, because IMO’s restrictions on CO2 are not necessity or progress or technological breakthrough, they’re a scam of unheard of proportions. Nothing good for society and economy, ever, comes out of scam and lies.

CO2 restrictions and their consequences are already giving creeps to the majority of shipping, from shippers to ships’ Captains and Engineers. There are no international agreements or even understanding, of how to control restricted emissions, and how to punish violators. Some States already reject scrubbers. Some States are busy making drones to spy on ships in or near their waters. Some say levies collected from ships should serve one purpose, others disagree and offer other purposes. Some say levies should be calculated and collected in accordance with their scheme, others disagree and say their schemes are better. Some States already declared, that violators (ships, Captains, Chief Engineers, shipowners) will be severely punished, with imprisonment option. Some States are still musing and calculating the best options, to profit most.

A pack of stray dogs fighting over bones, that’s what it looks like. Of course CO2 Restrictions scam will give a tremendous boost to corruption. Corruption is an organic, integral part of CO2 Restrictions, just by the wide scope of understanding, calculating and implementing restrictions. They’re driven not by any sensible scientific reasoning, but by hoax, greed and egoistic aspirations. Plus stupidity.
So those who nourish corruption, by inventing and implementing new regulations, declare the war on corruption. Why don’t they look in mirror, to spot the roots of the corruption? Rhetoric question, of course. 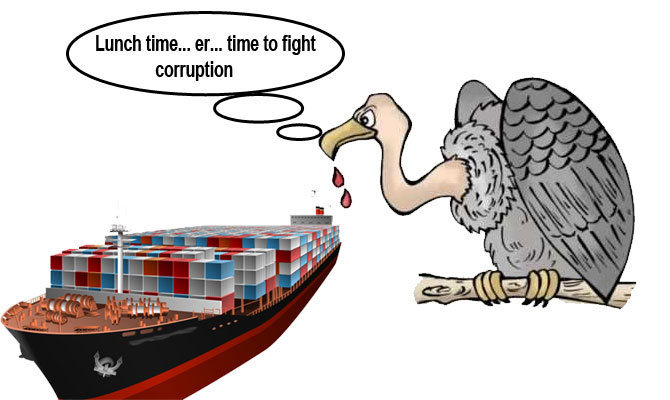