IRISL container ship SHAHR E KORD with 144 containers on board berthed at Misrata Libya on Apr 26, and is declared detained. A thorough check of ship and containers didn’t find any prohibited goods, according to Libyan Interior Ministry official statement. The ship nevertheless, is banned from leaving port, because the ship is listed in the US-EU sanctions, imposed on Iranian shipping and Iranian ships.

Previous news:
April 24, 2019 8:08 pm
What’s the story around Iranian container ship SHAHR E KORD, and what’s going on, remains unclear. The ship approached Misrata Libya in the morning Apr 23 and was moving around there, until finally, brought to anchor at Misrata anchorage, on arrival from Burgas Bulgaria, with Misrata stated as port of destination. According to governmental officials and military, the ship is loaded with arms and ammunition, destined for rebels or militants, controlling Misrata and according to officials, being supported by Iran and Turkey.
Bulgaria is known for producing and selling arms to Middle East countries, including most vulnerable ones. The ship was monitored and reported as probably, carrying cargo of arms, by a number of international bodies.
Libyan officials said they’ve been closely monitoring SHAHR E KORD, but understood, the ship wasn’t boarded and checked, maybe because militants prevented it. 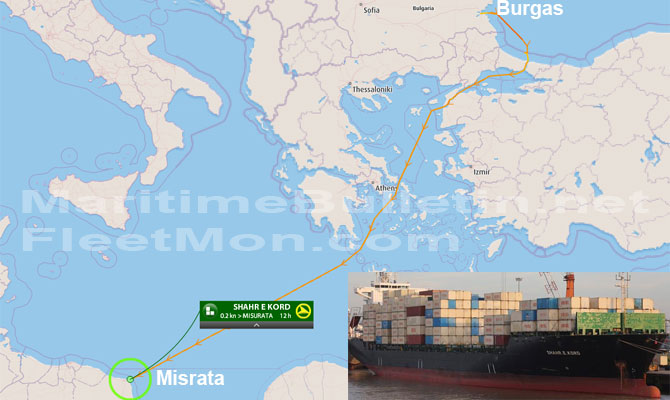