Indian media news release: A lieutenant commander lost his life while attempting to snuff out an accidental fire that broke out on India’s only aircraft carrier INS VIKRAMADITYA near the INS Kadamba Naval Base in Karwar on Apr 26.
According to the Indian Navy, the carrier was entering the harbour at Karwar base, when an accidental fire broke out on the ship. Though the crew was able to bring the fire under control immediately, lieutenant commander DS Chauhan lost consciousness inhaling the fumes during the firefight.
He was rushed to the INHS Patanjali hospital near the base, but breathed his last while undergoing treatment.

Comment:
Aircraft carrier INS VIKRAMADITYA is a sister-ship of infamous Russian aircraft carrier ADMIRAL KUZNETSOV, which is rumored to be scrapped soon, after countless accidents, including deaths and fires, hunting hapless ship throughout all her career. Renovation of INS VIKRAMADITYA in Russian Navy Shipyard was several years behind initial contract and several billion dollars above initial sale cost, plus corruption scandals. This is not the first mortal accident – at least two people, including a civilian, were killed and another two injured, following leakage of toxic fumes from the sewage plant on June 10 2016. A number of workers were injured or died during ship’s renovation, in Russia.
These ships are an ill-fated series, including Chinese (bought in Ukraine) first aircraft carrier, LIAONING (bought in Ukraine as VARYAG, Kuznetsov-class aircraft carrier), recently recognized by Chinese Navy as a failure, full of “structural constraints and “congenital” defect”.
If there is an ill-fated family of Navy ships, Kuznetsov-class aircraft carriers family is the one. 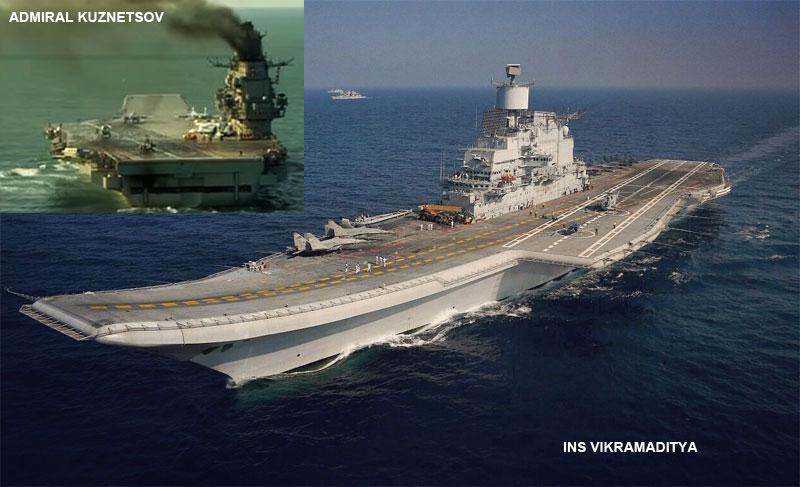