It was know for quite a time, that an offshore ship was attacked in Gulf of Guinea in 03 57N, 006 39E, 32 miles southeast of Brass, in the morning Mar 9. According to IMB, the ship was approached by pirates armed with machine guns in two speed boats. The captain immediately notified the naval escort security vessel which manoeuvred to engage the pirates. One speed boat closed in from the port side of the vessel and crossed the bow, while the other speed boat exchanged fire with the security vessel. The alarm was raised, the crew proceeded to the engine room and all power was shut down. The pirates boarded the vessel with the aid of an elongated ladder. They broke into the accommodation, vandalized the cabins and took crew belongings and vessel properties. The pirates then proceeded to the engine room, kidnapped five men and escaped. The remaining crew members took the ship, under escort, to a safe Nigerian anchorage. One Nigerian Navy armed guard was reported killed in the skirmish.
IMB didn’t identify the ship, to the best of IMO and its’ branches practices.
Lloyd List identified the ship, in its’ report, as an offshore support ship E FRANCIS. Understood the ship is operating under Nigerian flag, most probably with Nigerian crew. It can’t be ascertained, therefore, whether pirates attacked the ship as a regular prey, or attack was somehow related to ship’s nationality.
Offshore support ship E FRANCIS, IMO 7408897, GT 2645, built 1975, flag Nigeria (since 10.2017), manager MAXSUN MARINE SERVICES FZE, UAE (EQUASIS). 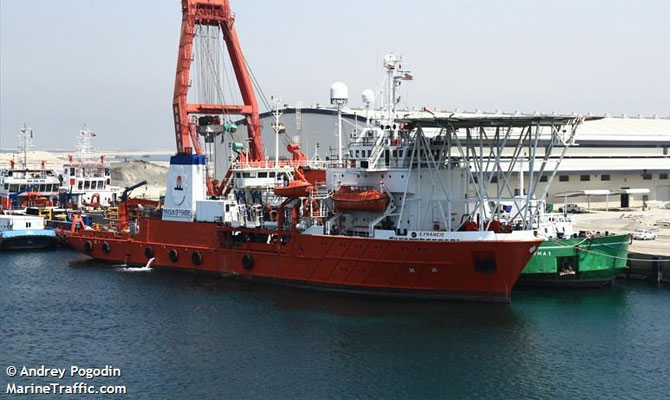