Hot industry news of recent is the horrendous, creepy story of starving crew on board of bulk carrier VILLA DESTE, anchored at Hay Point Australia since late January.
Crew aboard a ship at a BHP terminal in Queensland claim they are being starved and underpaid, in yet another instance of the coal giant’s veil of secrecy over its operations in Australian waters. A seafarer aboard an 80,000-tonne bulk carrier, the Villa Deste, contacted the International Transport Workers’ Federation (ITF) pleading for help (email below). The starving crew claims to have no food and no onboard wages, and being fed on a $4 food budget per day.
https://www.hellenicshippingnews.com/bhp-ignores-pleas-to-help-starving-crew/
Well, how many of the crew did claim they’re dying, while underpaid? Just one? Why then, …claim they are being starved…? Who he is anyway, why he is anonymous – I mean if people are starving, they surely, wouldn’t care for staying anonymous, they’re struggling to stay alive, mostly. And by the way, if they’re fed on $4 per day only, how come they don’t have food at all?

One industry media, namely The Maritime Executive, however, went further into the story, and found out, that in a statement to The Australian the Greek ship operator Evalend Shipping rejected the allegations: “We have immediately contacted the master of the vessel Villa Deste …“[The] master has obtained a written statement from all crew on-board that they are very happy with the company and the vessel… Therefore we categorically reject any kind of such allegations and we have serious doubts that any one from the crew has contacted the union.”
https://www.maritime-executive.com/article/itf-crew-starved-and-underpaid

If one’s to dig even deeper, one may find the basics of the whole story and the true reason which caused an emergence of a letter “from crew member”.
Maritime Union of Australia MUA is at war with BHP, accusing BHP and everything connected with BHP in any evil one can think of, with all trademarks of the leftist warriors – i.e. MUA accusations and allegations don’t stand even slightest fact-check. Find details (a lot of them) here:
Maritime Union’s ship shaming a sham
https://www.afr.com/business/muas-ship-shaming-a-sham-20190213-h1b7yz

Regularly, I’m contacted by Russian mainstream media to give my expertise on this or that incident, involving abandoned crews or wage delays. My first question (always knowing what answer I’ll be given) is: where did you get this information? Right answer is – from SUR (Seamen Union of Russia, ITF affiliate). My second question is also the same – did you have information from any other source, specifically from ship owner, or directly from the crew, without trade unionists interference? Answer is the same, all the time – no, no other information available. After that, I give them my expertise, but not on the incident, but on ITF and everything affiliated. Not a favourable one, I’m afraid. I’ve had a vast first-hand experience in dealing with trade unionists, and have too many facts on my hands, to trust anything they say, even if it is something as innocent, as asking what time is it now. They aren’t interested in matter being right or wrong, they’re interested in probable profits, or lack of them. 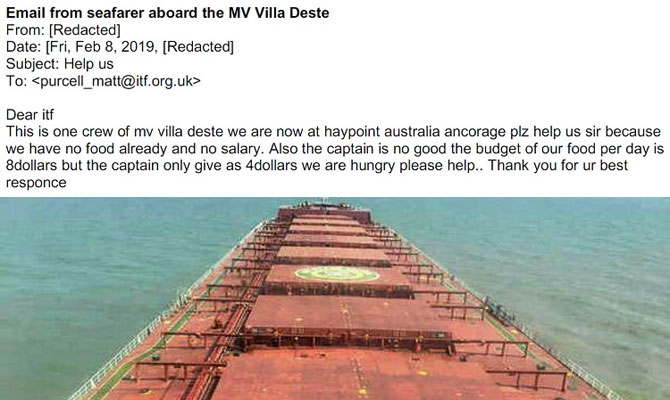