It was a well-known “migrants tragedy” story propagated by all mainstream media:
Up to 117 migrants might have died when a rubber dinghy capsized in the Mediterranean Sea off Libya.
Flavio Di Giacomo of International Organization for Migration says three survivors were plucked to safety by an Italian navy helicopter on Jan 18, and they say 120 were aboard when the dinghy left Libya.
He said the people came mainly from west Africa, adding: “Ten women including a pregnant girl were aboard and two children, one of whom was only two months old.”
The navy says its airplane launched life rafts after it spotted the sinking dinghy Friday with about 20 people aboard. It wasn’t immediately clear if some migrants had already fallen off.
Three survivors rescued by helicopter, one from Gambia and two from Ghana – claim that there were 120 of them on the dinghy, and that they didn’t have life jackets.

On Feb 9 it became known, that Rome Prosecutor Office turned to tanker instead of Coast Guard, NGOs and human traffickers, suspecting tanker’s Master, of Croatian nationality, in deliberate attempt to avoid “rescue operation”, because according to Italian CG, tanker obeyed their order and sailed to distress site only after Master was threatened with possible repercussions.

It all sum up as following:
Nobody knows how many migrants were on that dinghy – Italian plane counted some 20 people in water. 3 rescued migrants claimed there were 120 on board, among them 10 women including pregnant one, and 2 children, one being 2 months old. Rather odd for 3 survivors to be that accurate. How many people were there? 120? 240? 20? We don’t know and we’ll never know. But nevertheless, their account and their figures are accepted as truth and nothing but the truth when in fact, it is not so.

The story unfolded like all other such stories before, and no doubt, will unfold after – rubber dinghy full of migrants sails out to international waters and sends distress message, migrants waiting to be picked up by either NGO taxi, or Navies ship, or whoever.
It is brazenly clear, that those dinghies voyages aren’t intent to cross Mediterranean sea and reach European coast. They are to reach international waters and wait for “rescue”, staging “distress” situation.

Well, rubber dinghy full of people in winter Med is an emergency situation, no doubt, but all involved parties, including those who’re sending these boats to sea, including migrants themselves and of course, including regular “rescuers”, know the risks and know the game.
To round it up, they stage the distress situation, intentionally and conscientiously. In any other not-migrant incident under similar circumstances, involving staged ship wreck for whatever purpose, rescued people are subject for investigation, because they committed a fraud and endangered other people, who rushed to their help.

Master’s first and foremost responsibility is safety of his ship, of its’ cargo, and of crew. Tanker CORDULA JACOB loaded oil or oil product, and being laden with inflammables, tanker is an object with much more stringent safety requirements applied. Major disaster with such ship is a major disaster for the whole region, including coastal States.

Master was ordered to sail to “disaster” site and pick up an unknown number of migrants – most probably, young men of fighting age; highly probably prone to violence; with absolutely no knowledge of their origin, background, possible infectious diseases, etc. Their number could be anything, from several to dozens and even hundreds. Their presence on board of a ship loaded with hazardous cargo, is a threat. Tanker with “rescued” migrants on board is a distressed tanker, especially considering situation in general – for all we know, tanker would hang around in Med sea, for days at best, weeks more probably, waiting for political solution and permission to disembark highly unwelcome guests.

And with all said, Master is to be victimized! 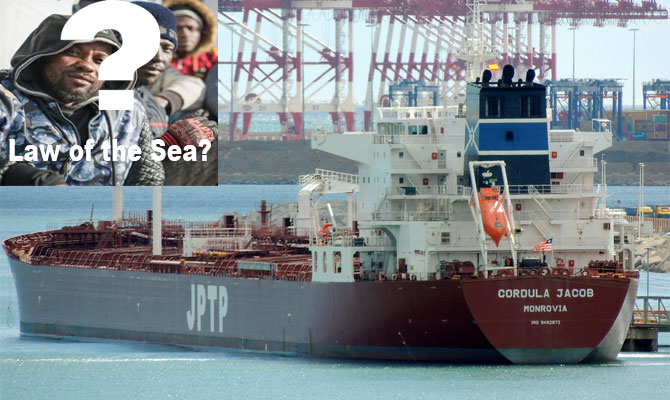