Container ship YANTIAN EXPRESS fire UPDATE Jan 31 Waiting
YANTIAN EXPRESS with escorting tugs reached Bahamas Freeport in the morning Jan 30, reduced speed to dead ahead and headed south. Most probably, the ship is waiting for berth at Freeport, arriving earlier than ETA Feb 1. As all concerned or interested already know, HAPAG-LLOYD declared General Average, with all hell and headaches it implies for cargo owners and shippers – especially for small ones.

Container ship YANTIAN EXPRESS fire UPDATE Jan 27
YANTIAN EXPRESS according to track and notes is moving under own power since Jan 25-26, ship’s speed of some 9-10 knots confirms it. Tugs MAERSK MOBILISER and SOVEREIGN escorting. Some 760 nm to sail to reach Bahamas as of 0600 UTC Jan 27, ETA Feb 1.

Container ship YANTIAN EXPRESS fire UPDATE Jan 24
According to AIS records of tugs MAERSK MOBILISER and SOVEREIGN working with YANTIAN EXPRESS, they’re heading towards Freeport Bahamas, probably port of destination, both ships give ETA Feb 1. As of 0700 UTC Jan 24, caravan is to sail some 1250 nm to reach Bahamas.
Peter Ziobrowski, the blogger behind the Halifax Shipping News, says photos of the ship and information provided by its owner, Hapag Lloyd of Germany, suggest the fire has destroyed many containers on the ship’s forward deck.The company has confirmed all cargo in the ship’s first 12 bays, and some of the cargo in the two holds beneath those bays, have been affected by the fire.

Container ship YANTIAN EXPRESS fire UPDATE Jan 20
Progress seems to be very slow, port of destination remains unknown. Since towage commenced on Jan 16, until Jan 20, caravan moved some 280 nm in ESE direction, 70 nm daily. According to latest position, the ship is directed due east as of 0600 UTC Jan 20, probably it’s a technical turn, caused by firefighting or other problem, while the weather seems to be fine. Three offshore tugs are deployed now, SOVEREIGN (IMO 9262742) and MAERSK MOBILISER plus a newcomer, offshore supply ship HORIZON STAR (IMO 9752254).

Container ship YANTIAN EXPRESS fire UPDATE Jan 17
Latest HAPAG-LLOYD statement Jan 17:
MV “Yantian Express” (voyage 108E) – Update 3
Further to our CustomerInfo of January 10, 2019 we would like to provide you with following status update: The salvage operations show continuous progress.
The fire is widely contained and meanwhile the ocean-going tug “Union Sovereign” has arrived at the vessels position on January 15, 2019 to further assist the operations. Another ocean-going tug is on its way. At this time, it is not yet possible to make a precise estimate of any damage to Yantian Express or its cargo; this can only be more clearly assessed once the vessel reaches a port. Unfortunately, we cannot provide you with an ETA at the moment; this will be advised as soon as determined.
Comment: There’s some progress in towage in general western direction, port of destination unclear. Towage seems to be too slow, though the weather isn’t bad or rough. Most probably, firefighting is still going on, making towage difficult or from time to time, impossible. Two tugs at work as of 1800 UTC Jan 17: UNION SOVEREIGN and MAERSK MOBILISER.

Container ship YANTIAN EXPRESS fire UPDATE Jan 14
The ship with two salvage tugs is moving around, there’s no actual towage yet. Weather is fine, so it is not weather which hampers or delays towage, it is no doubt, fire and/or its’ dangerous consequences.
UPDATE: Two more tugs are to help with firefighting on YANTIAN EXPRESS: ATLANTIC ENTERPRISE (from NY or Halifax, not clear with this tug), UNION SOVEREIGN (IMO 9262742) sailed from Rotterdam.

Container ship YANTIAN EXPRESS fire UPDATE Jan 12
According to latest HAPAG-LLOYD statement, 5 crew were transferred back to YANTIAN EXPRESS, presumably on Jan 11. Fire said “to be largely contained and brought under control”.
Most probably, crew were transferred to container ship to facilitate towage and for a general reconnaissance. Maybe they remained on board, maybe they returned back to SMIT NICOBAR. It does seem like towage is ongoing, however slow and difficult. Average convoy speed on Jan 12 is 3 knots, with some 1100 nm distance to Halifax, assumedly port of destination, it’s some 2 weeks sailing, if weather permits.

Container ship YANTIAN EXPRESS fire UPDATE Jan 10
HAPAG-LLOYD issued a statement on Jan 10:
Container fire on the Yantian Express (voyage 108E) – Update 2
Further to our CustomerInfo of January 7, 2019 we would like to provide you with following status update:
Based on the currently available information, we have to assume that all cargo in Bay 12 on deck and forward is directly affected by the fire, also all cargo in Hold 1 (Bay 1 to 9). Further, we have to expect that all cargo in Hold 2 (Bay 11 to 17) is affected by fire, smoke and / or damage caused by firefighting water. Damage caused by smoke, heat and / or firefighting water in adjacent areas is possible.
All Reefers in Bay 1 to 24 are without power and switched off. All other Bays with Reefers are continuously supplied with power and in operation.
As soon as the full extent of such damages can be accurately determined, we will promptly revert with further details.
We fully understand that even at this point you would like to have further clarification on your shipment(s) onboard. Please appreciate that at this moment we are not in a position to provide any more specific information.
Let us assure you that we are working hard on getting more detailed information on your cargo and will share this with you as soon as possible.
We thank you for your trust in our company.
Maritime Bulletin:
Not much change in ship’s position – salvors probably are still fighting fire, as probably, they can’t yet take the ship on tow, because boarding the ship is too risky. Both salvage tugs are nearby.

Jan 7 UPDATE: Some titbits allow us to assume, that containers with dangerous goods, most probably already on fire, were the main reason behind the decision to evacuate all the crew, though fire seems to be quite far from superstructure – as far in fact, as it is possible on board of a ship. And as well probably, those dangerous containers contain some goods which when on fire, emit poisonous fumes.
Tug MAERSK MOBILISER (IMO 9765471) should already arrive at the scene.

Jan 6 evening UPDATE: On Jan 6 the rest of crew were transferred from YANTIAN EXPRESS to salvage tug SMIT NICOBAR. All 23 crew are now on board of SMIT NICOBAR, which is continuing firefighting in improved weather conditions, but weather is to deteriorate soon, said US Coast Guard.
Tug MAERSK MOBILISER (IMO 9765471) left St. John’s, to tow YANTIAN EXPRESS to Halifax. It’s expected to arrive on site in the evening Jan 6.
Evacuation of all crew in container ships major fires became something of a rule – many containers with dangerous cargo, explosive or poisonous, is the main cause.

Jan 6 UPDATE: On Jan 5 11 out of 23 crew were transferred from YANTIAN EXPRESS to salvage tug SMIT NICOBAR. Both ships moved generally, in southern direction, most probably in an attempt to find best weather conditions, permitting more or less safe firefighting.

Jan 5 UPDATE: The ship is moving in the same direction in keep with western wind, tug SMIT NICOBAR (IMO 9322592) already approached YANTIAN EXPRESS. No other information available at the moment – we don’t yet have information with regards to:
Extent of fire – how many containers and rows are on fire;
How many containers contain dangerous goods;
How dangerous it is for the crew and is there need for evacuation, at least partial.

Jan 4: Photo was sent to MB by crew’s member – apparently taken from superstructure, most probably bridge, of containers on fire, which are located in fore area. Flames and thick smoke are directed fore, just like it should be with the ship bringing wind and sea to the aft.

Fire erupted in one of the containers on board of container ship YANTIAN EXPRESS at around 0500 UTC Jan 3 NE of Bermuda in vicinity 35 48N 50 03W, and spread to other containers. The ship is en route from NE Asia to Halifax Canada via Singapore, Colombo. It was already known about fire on Jan 3, but confirmed only on Jan 4. The ship reduced speed and changed course in an attempt to mitigate wind force, assisting crew firefighting. At 1300 UTC Jan 4 the ship was moving in NE direction at some 7 knots speed, apparently continuing firefighting. No other information available at the moment.
The weather is stormy, with W wind up to 20 ms, so probably Master is trying to direct flames and smoke in opposite from superstructure direction. 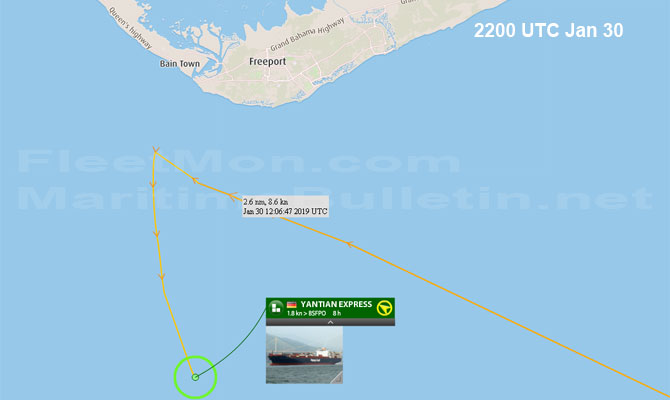 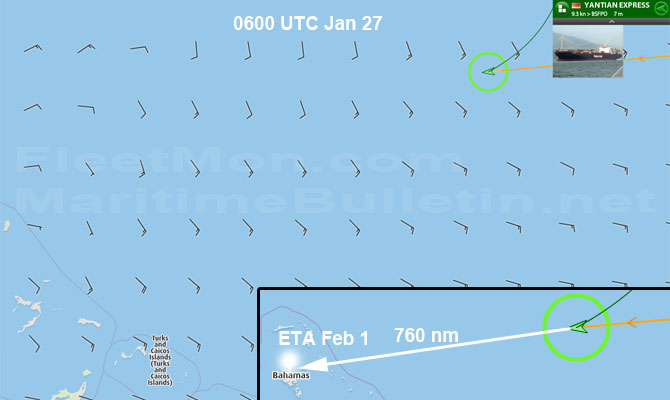 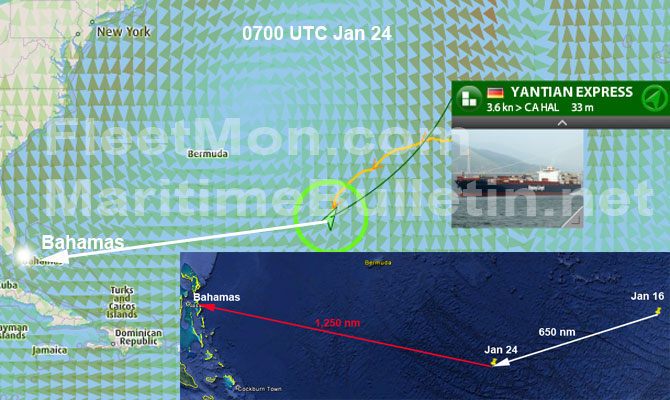 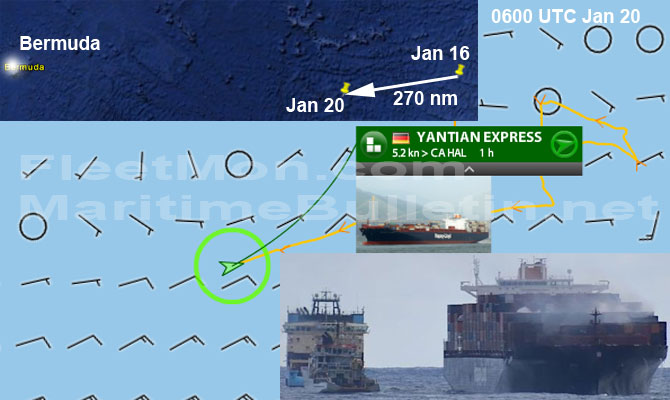 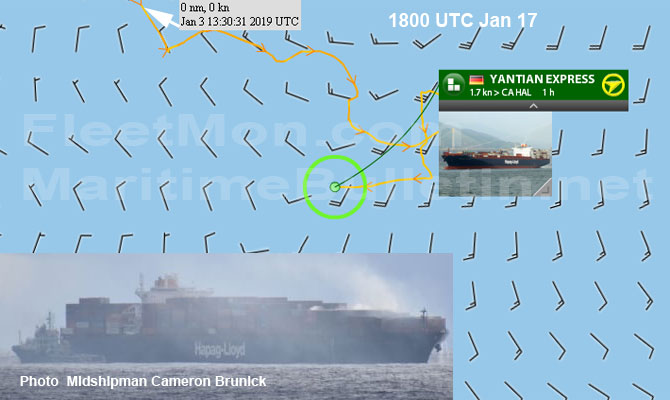 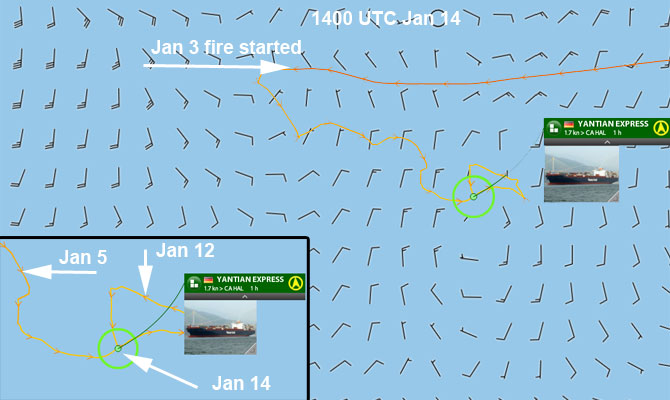 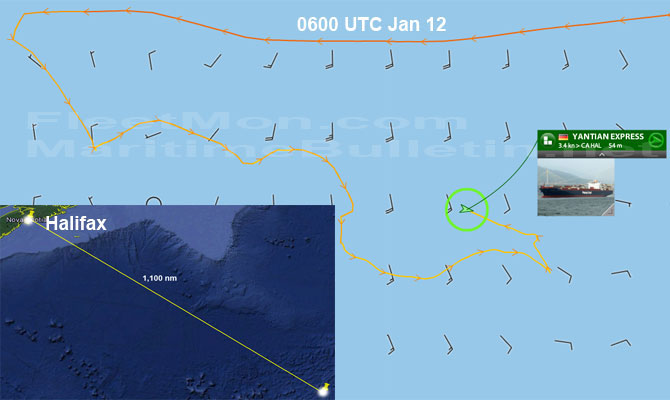 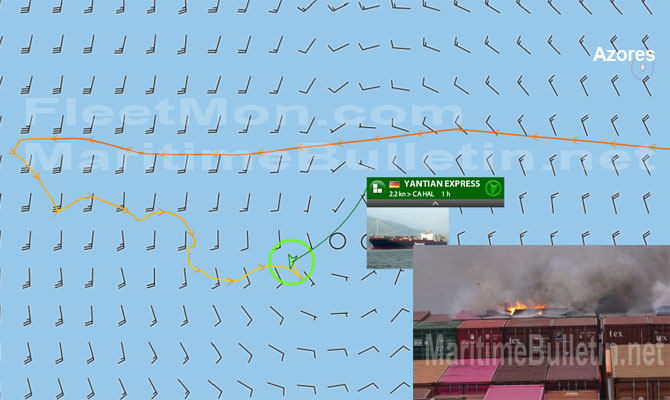 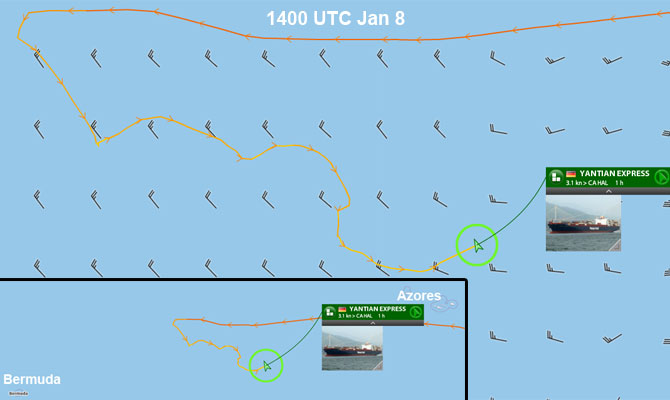 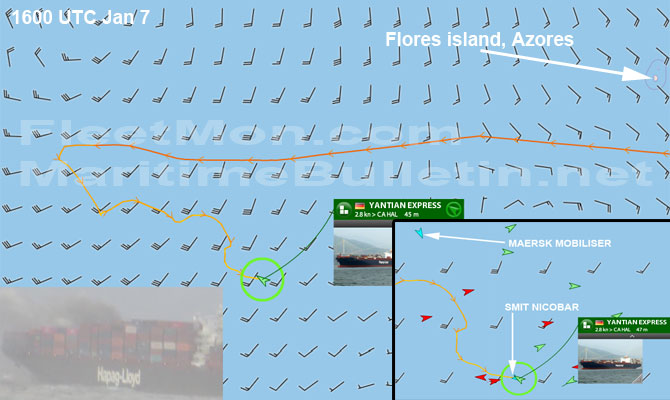 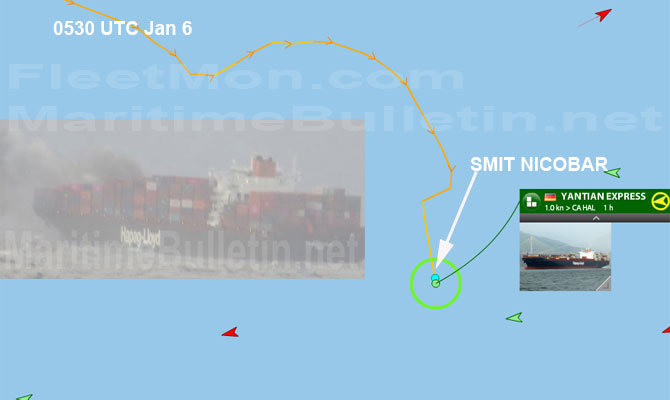 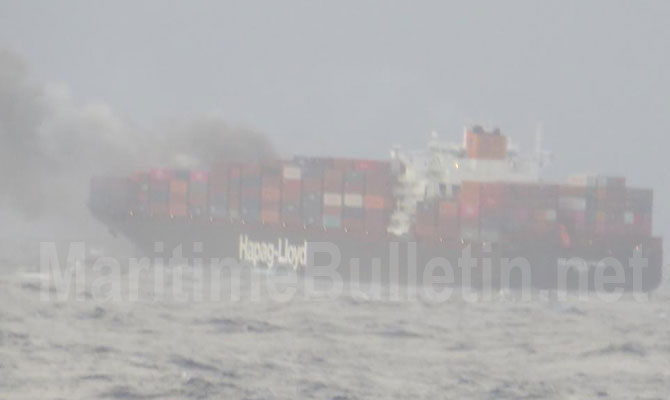 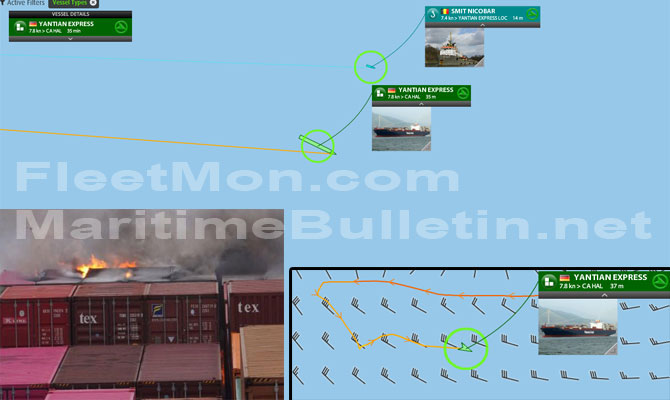 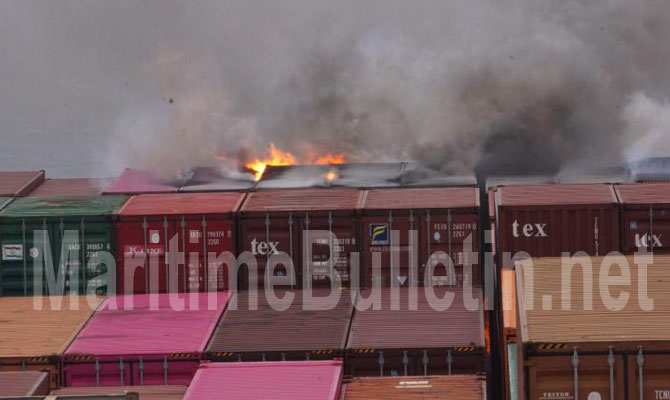 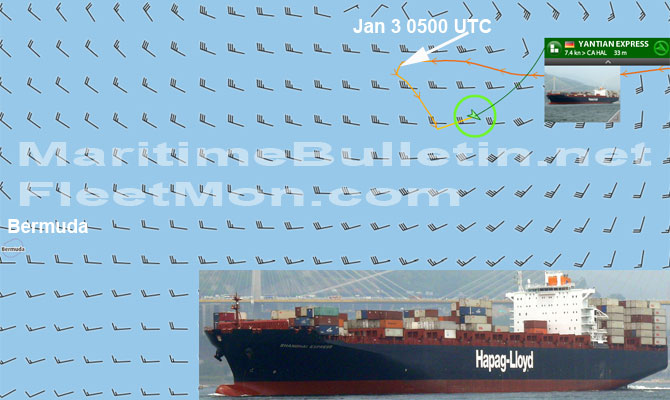