I read comments to news “Captain’s whole career ruined by vigilant pilot” with my comment http://maritimebulletin.net/2018/12/13/captains-whole-career-ruined-by-vigilant-pilot/ and I feel myself young again. I’m 25-years old and on the board of Soviet Merchant Marine ship, crew general meeting, orchestrated by “pompolit” (commissar), we’re all discussing and lashing out at one of us, caught drunk. We’re ruining his career and maybe his life, but that’s Soviet merchant ship with zero-tolerance policy. But alas, that guilty one still had a chance to save his professional career, if he demonstrated sincere remorse and if Party, impersonated by commissar (First Officer, not Chief Officer), doesn’t have any grudge against him, i.e. if he’s politically trustworthy.

In modern times, seamen caught drunk don’t have a luxury of being criticized by their compatriots and probably forgiven, no way anymore. They’re taken to courts, they lose their licenses, their jobs, they’re left with ruined careers, often they lose their freedom.
In modern times, seamen are expected (and ordered) to be something of a saint, with zero-tolerance to:
alcohol; tobacco; pornography (whatever it may be in the eyes of inspector); pollution; Global Warming gas emission; extremism (whatever it means – each country with its’ own understanding); dirty bed sheets; faulty knowledge of any of myriads of regulations, restrictions, instructions and guidelines; etc., etc., etc.
Hordes of those who know what’s good for seamen attack ships and crews in ports, checking everything they can think of, in name of safety and seamen well-being.
Seamen are very stupid folks, they don’t know what’s good for them, they are to be checked and guided in anything they do or are going to do – but thankfully, we have innumerous inspectors, both governmental and non-governmental, whose number I believe, is already surpassing the number of seamen.

Also, we have do-gooders, people of good will and intentions, righteous people, always knowing what’s good and what’s wrong, always ready to judge and come up with verdict (read comment to initial article). It’s real sad, to read comments written by apparently, aged people, who with age growing, didn’t become wiser, who failed to understand, that by prohibiting problem (zero-tolerance is a prohibition) we don’t solve it, we aggravate it, notwithstanding the severity of punishment. On the contrary – the more severe is punishment, the more severe are negative consequences. Read history, righteous ones.
I believe, Navy policy is the most correct and effective, if talking about vice problems. They don’t take their own to civil courts, they decide and judge between themselves. They give guilty a chance. You righteous ones, don’t give any chance to anyone, whatever are the circumstances. And yes, Navies in general, don’t like snitching, however officially welcomed it may be. There’s such thing which is called “morals”, and it still matters on high seas.

Curiously, my opponents regularly hint at my “non-native” English status. Not that they are having problems with understanding me, it’s you know, a hint at my judgment status and right to judge, in general. Dear Sirs, you’re lost in time and mistake eras. The majority of modern seamen are, like me, “non-native” English speakers. They understand me perfectly well, whether I write in English or Russian. You’re having problems with my English? Those are your problems, not mine, ok?
One of the commentators lamented about “ships full of low skills crew”. This “zero-tolerance” policy of yours is a straight way, sure way, to provide low skill crews. Young, talented, competitive men avoid maritime careers not only because of general, generic hardships, risks and adversities of seaman’s life, but also, because while on board of the ship, they’re controlled and regulated about as much, as in Navies, even stricter, in some areas.

Situation: I’m visiting my friend, Captain of container ship docked in Laem Chabang, Thailand, near famous Pattaya. Young officers took a leave and of course, rushed to Pattaya. Suddenly, inspectors boarded the ship, to check all crew on alcohol and drugs. Captain called the boys and ordered them to return to the ship, immediately. And they’ve been in Pattaya, of all places! Of course they don’t want to be subjected to total control, but most of all, they are afraid of being ruined, professionally and otherwise, by just one misdoing, one wrong step, especially if that wrong step isn’t wrong anywhere around except Merchant Marine, like you know, drinking a can of beer to relax in your free time. Their shore-based peers enjoy life and find them losers. With so much zero-tolerance around, rightly so.

My commentators were very happy to share their experiences of encountering drunk Masters. Here are mine: I’ve been working once with a Master, who was real Master, an Ace, but only when drunk. He was famous for his berthing remarkable, superb skills. No tugs, no pilots – just him, his high spirits, crew and the engine. Like he was a computer or something, it was thrilling and awesome. When sober, he was your regular Master, shy, indecisive, fearing any daring maneuvering. That same Master rescued crew and passengers of sinking Indian passenger/cargo ship in stormy Indian ocean, in very challenging situation, back in 70-th. During his career, he didn’t have any accident. I knew other Masters famous around for their skills, courage and drinking capabilities. So what? There’s nothing absolutely black or absolutely white, except zero-tolerance policies, politicians and do-gooders. Guys, you want to pursue zero-tolerance to everything you believe is bad? Join Communist Party. 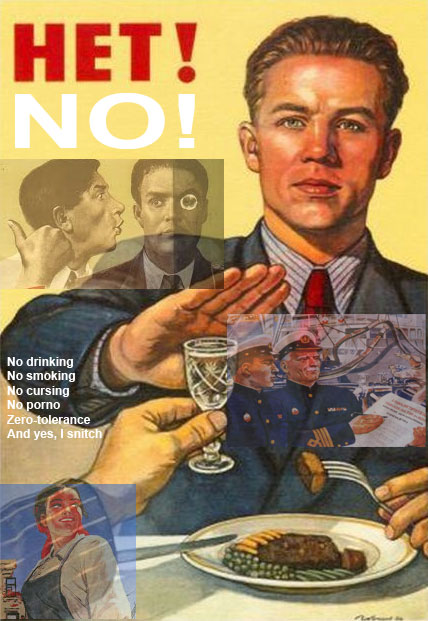