Nov 20: Ro-ro NIVIN and her victimized crew were thankfully, freed from migrants, who seized the ship and the crew demanding to be sent to Europe, holding them for some 10 days. Libyan forces stormed the ship and disembarked all migrants who were on board, some 80 of them. Of course all major media burst with indignation, weeping over poor migrants’ fate, doomed to be brought to that awful Libyan migration center. Libyan authorities did just what they had to do, fulfilling their duty – they freed the ship and the crew from violent mob of intruders. They restored an order. Civil merchant ship and civil merchant mariners have nothing to do with migrants and their problems. They rescued those migrants, but when migrants found out, that the ship was bound for Libya, not Europe, migrants rioted and took several crew as hostages, demanding the ship to sail to Europe.
The above description of what really took place on board, originated not from some far-right something or somebody, but from crew and from Ukrainian Ministry of Foreign Affairs.
No wonder major media didn’t publish real story, it’s against agenda and all the rest which goes with it, including total lack of shame, and professionalism.

Nov 16 Update: There are 3 Ukrainian citizen among NIVIN crew, they’re in constant touch with relatives and inform them on incident and its’ development. Migrants became aggressive immediately after they’ve been picked up from their boat and found out, that the ship which rescued them, is sailing to Libya, not to Europe. Migrants were told (by whom, by traffickers, by NGOs?) that they’ll be picked up by the ship and taxied to Europe, so they went out to the sea on their boat and waited for some 30 hours. NIVIN was ordered by Italian authorities to pick up migrants, there wasn’t any “rescue”, it was a pick up. So NIVIN and her crew were framed by Italian authorities, which knew where the ship was going, from the very beginning, and of course, could easily foresee consequences.
In more general terms, NIVIN and her crew were framed by EU “migration policy”, by major media and of course, by those so-called NGOs. Now the NIVIN news hit the headlines of major media, and nobody – nobody! – is saying anything about crew and crew’s ordeal. They all cry over poor, desperate migrants.
Now about migrants – those poor and desperate migrants were, de jure, rescued by NIVIN, and all NIVIN had to do after rescue, according to any existing law, was to deliver them to nearest port, exactly what NIVIN did. Migrants de facto, hold the ship and its’ crew as hostages, in an attempt to switch situation in their favor, and be taken somehow, to Europe. All of media and NGOs are at their side, sparking off “rescue” campaign and trying to ignite public pity (in vain, if judging from comments and social nets posts). Again, de facto, media and NGOs are colluding with criminals, because as long as remaining on NIVIN board some 80 migrants hold the ship and the crew, they’re criminals, guilty of piracy act.
According to latest update from Ukrainian NIVIN crew members, 2 Romanian crew were repatriated after Romanian MFA intervention. Ukrainian sailors hope that Ukrainian MFA will follow the lead, and find the way to take them from ship, and repatriate to Ukraine.

Nov 14 Update: In some sanguine updates, everything is fine, and the incident resembles Christmas story nearing happy end – migrants are located on cargo deck with no access to living and service quarters, there’s no aggression, and there’s enough food and water for all on board. Migrants don’t want to leave the ship because they’re afraid they’ll be taken to migrant centers in Libya, infamously harsh on migrants.
According to other reports, situation isn’t all that bright. Migrants turned aggressive soon after they found out, that the ship which picked them up from boat, was under way to Misurata, back to Libya. They’re mostly of Ethiopian, Sudanese, Eritrean and Pakistani origin, they paid for their passage and naturally, went angry or infuriated, when all of sudden, it became clear that their exodus to haven is to fail, because they’ve been “rescued” by wrong ship. Those other reports said the crew are afraid and mostly, stay at cabins. Migrants flatly rejected surrendering to Libyan authorities and no doubt, are waiting for friendly cavalry – UN migrants agency emissaries, NGOs do-gooders and major media, to launch “rescue” campaign and turn failure into success. That’s their only chance to avoid disembarking and all what will follow, including repatriation to their home countries, without any refunding, of course. The ship is their fortress, the crew is their bargaining asset.

Nov 13 Update: The ship with migrants confirmed to be ro-ro NIVIN, by Romanian authorities, which are trying to get two officers, Romanian citizen, from the ship, which is seized by migrants, together with her crew. Crew can’t leave the ship and should be considered as hostages, held by migrants. But migrants aren’t to be blamed of course, they’re poor desperate victims of unfavourable circumstances (they paid for passage to Europe, but passage went wrong), not a mob of kidnappers and pirates.

Nov 12: Reuters reported 95 migrants rescued by cargo ship off Libya rejecting leaving the ship in Libya. Migrants were picked up by cargo ship on her way to Misurata Libya on Nov 8, on arrival they refused to leave the ship, and as of Nov 12 were still on board, after 3-day failed negotiations. They’ve been provided by authorities with food, water, blankets, etc. Not Reuters, nor EuroNews, reported anything about the ship and the ship’s crew – how do they feel and what’s their condition. Are they held as hostages, are they in danger? Are they free to move around and leave the ship? What about shipowner, does he have any chance, together with crew, to be compensated for all troubles and expenses?
The ship and the crew are the last thing on the mind of media, UN and the likes. I could say “shame on them”, but what’s the use, they don’t have any. They have agenda instead.
According to AIS records, one ship may be the one in question, it’s ro-ro NIVIN, IMO 8206533, GT 5462, built 1983, flag Panama, manager ? 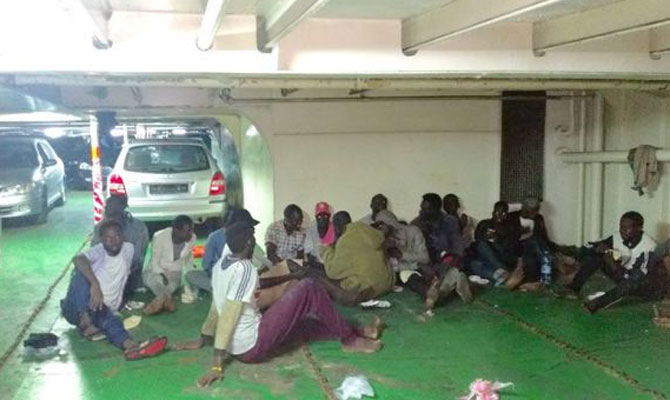 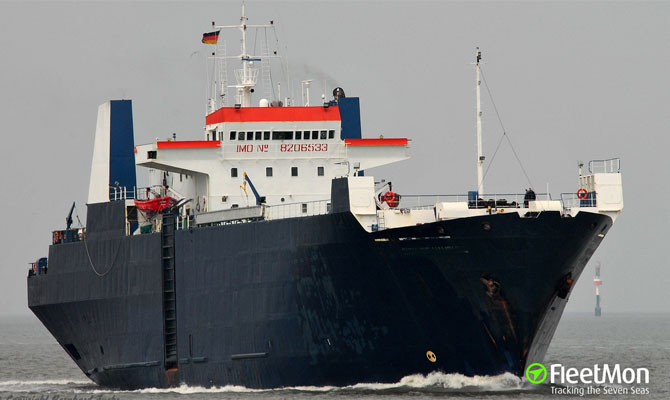