One of the biggest floating docks in Russia PD-50, with the only one Russian air carrier ADMIRAL KUZNETSOV in it, sank early in the morning Oct 30 because of power disruptions, after uncontrolled flooding of ballast tanks. Dock sank in a very short time, 4 workers were injured, 2 of them being in critical condition. According to officials, accident took place when air carrier was taken out of dock after completing dry-docking, the ship didn’t sustain damages and was shifted from dock to ship repair yard berth, for further repairs. Unofficial sources said two dock cranes collapsed, one of them fell onto air carrier deck.
Floating dock PD-50 was built in Sweden in 1980, ordered by Soviet Navy and designated for the repairs of the biggest Navy ships, including air carriers and biggest nuclear submarines. Length 330 meters, width 67 meters, loading capacity 80,000 tons. Stationed at Ship Repair Yard No. 82, Murmansk. Ill-fated nuclear submarine KURSK after refloating was taken to, and dismantled, at PD-50.
Air carrier ADMIRAL KUZNETSOV https://en.wikipedia.org/wiki/Russian_aircraft_carrier_Admiral_Kuznetsov 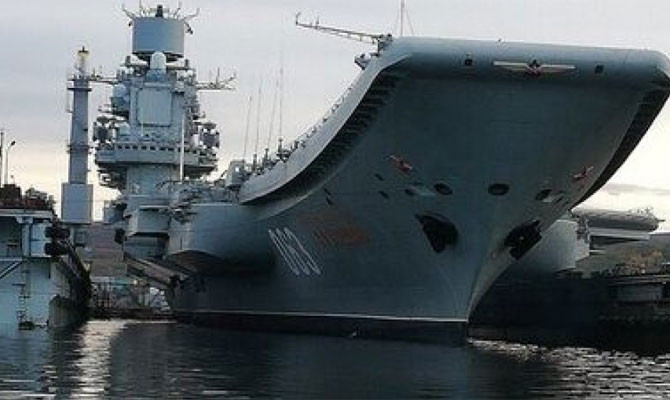