Aug 22: FRONT HAKATA is under tow since Aug 20, port of destination Zhoushan-Ningbo, East China sea, ETA Aug 30. It is not clear, whether tanker was offloaded during her 48-hours stay at Tokyo Bay. She’s towed by offshore tug AKATSUKI (IMO 9728966), sailing in WSW direction at some 4-6 knots speed. Probably, such a wide berth to Japan islands is explained by typhoon SOULIK, raging in East China sea, and typhoon MARON, approaching southern Japan from southeast. Tanker presently, is reported as “disabled after engine failure”.

Aug 18: Disabled after fire VLCC was finally, towed to Tokyo Bay and moored, offloading to commence today. Not clear why did Japan Salvage tow tanker around for such a long time.

Aug 11 Update: VLCC FRONT HAKATA is still at sea reportedly under tow, though no tug visible nearby, moving or drifting in eastern direction at 1-3 knots speed. No information as to why and what’s next.

Previous news:
Aug 7 Update: Reportedly, FRONT HAKATA was taken on tow by (according to AIS) offshore supply tug AKATSUKI (IMO 9728966), towage commenced in the morning Aug 7 Tokyo time, destination unknown. Caravan is moving in southwest direction at some 4 knots speed, away from port of destination Chiba. According to additional inside information, fire in engine room was extinguished by crew by sealing engine room and understood, activating fire extinguishing system. Supposedly, crew were to restart machinery after fire was out. But tanker was taken on tow and is towed away, maybe because of safety reasons. With approaching typhoon Shangshan, soon to hit eastern Honshu, maritime authorities may find disabled VLCC in full load to be too much of a threat, moored or anchored. Damages inflicted by fire obviously are more serious than previously stated, because the ship is still disabled and probably, requires land facilities for repairs.

First news:
Supertanker FRONT HAKATA fire, Tokyo Bay
August 5, 2018
Very Large Crude Carrier FRONT HAKATA reported fire in engine room at around 0300 Tokyo time Aug 5 west of Tateyama, Chiba Prefecture, Japan, south of Tokyo Bay. Tanker was waiting for berth at Chiba since arrival from Saudi Arabia on Aug 4, being in full load of crude oil. Fire was reportedly extinguished by 0900 Tokyo time, tanker meanwhile, was moved out to sea, at 1330 Tokyo time she was southeast of southernmost Chiba with 3 tugs at her side, moving in southeast direction at some 1.5 knots speed, apparently under tow. 25 crew, all Indian, not injured, no leak reported, no risk of fire spreading to cargo tanks. 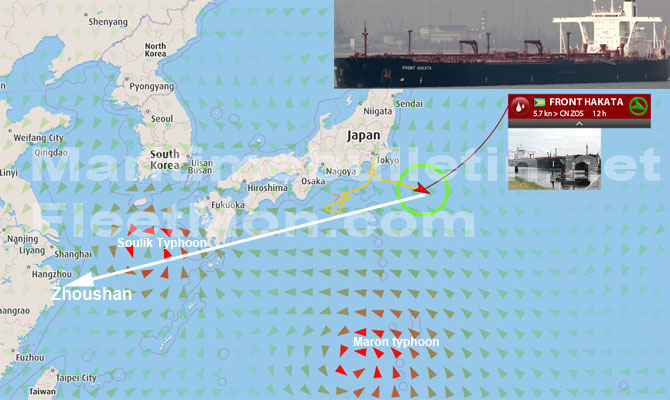