A rather unusual and confusing incident took place in the morning Aug 12 off Santos Brazil, when GRIMALDI’s ro-ro GRANDE FRANCIA was boarded by several armed man from a boat, which came alongside the ship, anchored on Santos outer Anchorage. The crew who spotted intruders alerted the bridge, Master activated security system and informed Santos authorities, requiring immediate assistance. Understood the crew blocked superstructure or hided inside most safe compartments, waiting for help. Navy patrol came too late to intercept the intruders because of foul weather, they managed to flee the ship. Cargo area was searched, two broken containers were found, with nothing stolen. But in two other containers bags were found with 1322 kilo of cocaine in them. Bags were still wet. According to preliminary version, broken containers were a distraction, to smokescreen drug shipment. But police isn’t sure whether cocaine was brought by intruders, or was already on board, loaded during ship’s stay in port.
What’s all about, is absolutely unclear. Several days before, on Aug 7, another GRIMALDI’s ro-ro ship, GRANDE NIGERIA, was also involved in cocaine trafficking attempt, while the ship was berthed at Santos. http://maritimebulletin.net/2018/08/10/1-2-ton-of-cocaine-smuggled-on-board-of-grimaldi-ro-ro-ship-at-santos/
Ro-ro cargo ship GRANDE FRANCIA, IMO 9246592, GT 56738, built 2002, flag Italy, owner Grimaldi Group. 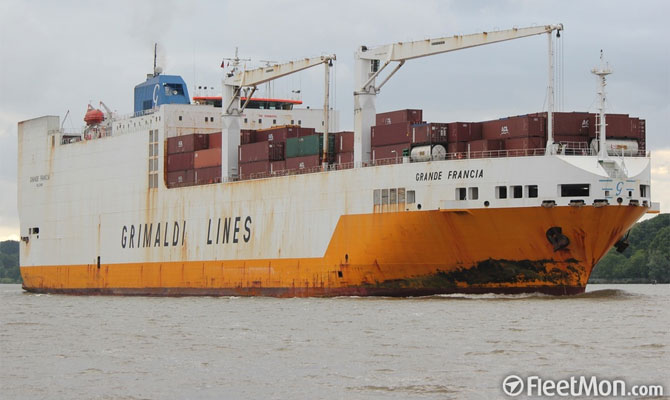