Jul 22: PALMA DE MALLORCA, SPAIN — The charity Proactiva Open Arms has filed a complaint with Spanish police against a cargo ship for failing to help migrants adrift on a destroyed dinghy in the Mediterranean.
“We have filed a complaint against the captain of the merchant ship TRIADES for failing to help and for involuntary manslaughter, and we’ll also do it against the captain of the Libyan patrol,” Oscar Camps, the Open Arms captain and founder of the NGO, said at a news conference.
https://www.voanews.com/a/migrant-charity-files-complaint-against-cargo-ship-libya/4492673.html

Jul 18: The dinghy–which was discovered by rescuers from the Spanish charity Proactiva Open Arms–was completely deflated, with the victims lying on the few wooden planks that remained afloat. Spanish rescue workers went to the scene–around 80 nautical miles northeast of Tripoli–after hearing a radio exchange on Jul 17 night between a cargo ship and a Libyan coastguard vessel about a boat in distress, the charity said.
The cargo ship remained in the area for several hours, until the coastguard assured it was on its way.
https://tribune.com.pk/story/1760809/3-woman-small-child-found-dead-deflated-dinghy-off-libya/

According to initial news, the ship in question, TRIADES, didn’t flee the scene, she was waiting for orders from a Coast Guard. In other words, the ship’s Captain was abiding the laws, while Open Arms boat was violating the laws by interfering into Coast Guard mission.
The background of this Open Arms complaint is crystal clear, it’s an attempt to find new tactics, new ways of keeping migrants inflow uninterrupted, after some European coastal States took a prohibitive stance on migrants and migrant traffickers. It’s an attempt to enforce shipping, by threatening it with criminalization, to apply pressure on migration opponents, be they persons, parties or States. And/or substitute NGOs “rescue” ships, which are becoming increasingly unwelcome throughout the region, with massive deployment of merchant marine.

Migrants “rescue” risks for crews and shipowners:
Extremely high risks for all crew, ships and cargo, such as:
– biohazard risks;
– physical violence arising from some petty conflicts to full-scale mutiny and taking crew as hostages;
– running out of all supplies including fresh water;
– denial from entering ports in coastal States, and therefore, interminable stay at sea in limbo;
– major accident or disaster caused by migrants, whether intentional or not, because presence of dozens or hundreds of absolute strangers, totally out of control, on board of a ship carrying dangerous/valuable goods, is extremely dangerous, prone with all kinds of safety/security risks, from fire to robbing;
– no protection, no compensation, no insurance – seamen are all on their own in this deadly game.
Shipowners:
– just by taking migrants on board, whether they’ll stay on board for hours, or for many days and weeks, heavy financial losses are becoming inevitable;
– risk of total loss of ship, crew and cargo;
– in case of major accident or disaster, inevitable numerous claims from all involved parties;
– total absence of any mechanism, law, institution or insurance, which may compensate losses, inflicted by involvement into “migrants rescue operation”.

Considerations to be taken into account:
The shipping in the Mediterranean region is on its’ own in this war, there are no allies around to help the shipping. At best, maritime organizations, starting from IMO, will stay low; at worst, they’ll assist migration process by accepting some obligatory regulations – after all, all of them are part of the system, which triggered off Med migration, in the first place. Major media will downplay or hide serious accidents, which are sure to come if shipping will be forced into “migrants rescue”, on a massive scale. “Industry” media will remain “impartial” and very politically correct, to the best of its’ practice.

New approach:
Situation in Mediterranean demands from owners and crews radically new approach – first of all, it’s a full understanding of the risks it carries. It’s a war, with shipping being a victim and a loser. It’s a no-win for shipping. So the ships, while navigating in most dangerous areas, should apply all measures technically and legally available, to avoid involvement in “rescue operation”, and there are quite a number of such measures. Most important is due watch vigilance – any suspicious blip on radar screen or a ship identified as NGO’s ship, should alert watch and Captain, and activate respective already prepared plan, to avoid threat. 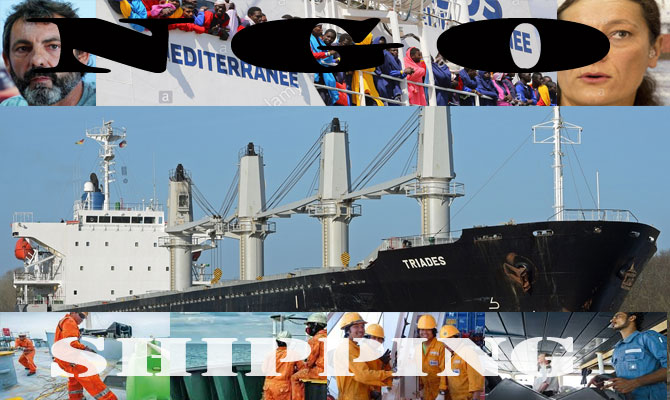