Jul 18 Update: MAPLE LIV operator Auerbach Bereederung GmbH & Co. KG notified Maritime Bulletin, that MAPLE LIV didn’t run aground, that’s what in fact, happened:
To update your article we would like to inform you that while transiting Suez Canal in convoy, “Maple Liv” was requested by Suez Canal Authority (SCA) to moor alongside Canal after the emergency stop of one vessel, but was aground at no time. Meanwhile, “Maple Liv” has resumed her voyage to Kuwait.

Jul 17 Update: Reportedly, general cargo ship MAPLE LIVE also ran aground in that Jul 15 chaos, but it isn’t confirmed. If she was aground, she was refloated in a short time, and completed Suez Canal transit, southbound, on Jul 15. As of 1530 UTC Jul 17, however, she was still at anchor on Suez outer anchorage. She’s en route from USA to Kuwait. Somehow, this accident went unnoticed.
General cargo ship MAPLE LIV, IMO 9381392, dwt 12740, built 2007, flag Liberia, manager AUERBACH BEREEDERUNG GMBH & CO.

It is not yet clear in full detail what happened, and how, in Suez Canal, probably later more details will come up. It was a major accident, which involved 5 ships and blocked the Canal. It seems like not only vessels are to blame for mayhem, but Canal management also. One disabled ship in Canal shouldn’t lead to multiply collisions and general chaos.

The mess in southern section of Suez Canal near Suez was unleashed by container ship AENEAS, which while proceeding in southbound convoy on Jul 15, suffered engine failure and stopped, causing collision of three bulk carriers PANAMAX ALEXANDER, SAKIZAYA KALON and OSIOS DAVID, as they weren’t able to stop or maneuver. All ships reportedly sustained damages and were taken apart alongside Canal with the help of tugs. It wasn’t yet the the end of the story – later NYK Post-Panamax container ship NYK ORPHEUS struck PANAMAX ALEXANDER, collision inflicted damages on both ships. 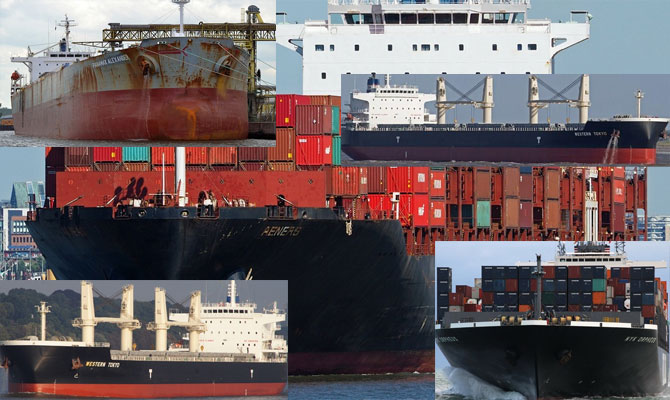