Press statement released by Elektrans Shipping Pvt Ltd on 14 June 2018
M.T. Nu Shi Nalini, currently sailing under the Indian Flag (IMO NO: 9619608) is under the ownership of Arya Ship Charterers Pvt. Ltd. and managed by Elektrans Shipping Pvt. Ltd , acting as the appointed ship manager as agents for and on behalf of the vessel owner.
She was enroute on a voyage from Mundra, India to Colombo, Sri Lanka and was deviated to OPL Cochin on 13th June 2018 to attend to repairs.
On 13th June 2018 at 1130 GMT when the vessel was safely anchored at off Cochin port for some technical repairs, an explosion was reported in the engine room at the lower platform while starting a machinery. Emergency action plan was immediately activated both on board and ashore. One crew member was injured with severe burns and medical evacuation plan was activated immediately.
The fixed firefighting system in ER was activated immediately and fire brought under control at 1400 GMT on 13th June 2018. The casualty was airlifted and evacuated by Naval helicopter shore-based hospital at 1600 GMT on 13th June 2018. The doctors informed the sad demise of the injured crew member when the casualty was brought to the hospital. We are deeply saddened on the unfortunate demise of our crew member and are in close contact with his family. The tugs have been called for to provide further assistance as required on board.
The situation on board the vessel is under control and the crew are reported safe on board. All necessary and timely assistance is being provided by Directorate General of Shipping, Port authorities at Cochin, Indian Navy, Indian coast guard, MMD Kochi and vessel P & I providers.
Elektrans Shipping Pvt Ltd is closely monitoring the situation and is in liaison with the authorities to keep a complete control of the situation and provide all the necessary assistance and support required for safety of life, protecting the environment and property.

Initial news:
Update: Tanker is said to be loaded with naphtha, fire started at around 2030 LT after explosion, tanker was at anchor some 15 nm off Kochi. Navy ship INS Kalpeni together with tug OCEAN ELITE are near tanker, ready to evacuate the crew.
Chemical tanker NU SHI NALINI is on fire in Arabian sea off Kochi, fire started on Jun 13, 1 crew evacuated with 80% body burns, the rest 22 or so crew are on board waiting to be rescued, according to available information. Tug OCEAN ELITE and Navy ship are on the site, helicopter is to be deployed or already deployed.
Chemical tanker NU SHI NALINI, IMO 9619608, dwt 16705, built 2012, flag India, manager ELEKTRANS SHIPPING PVT LTD. 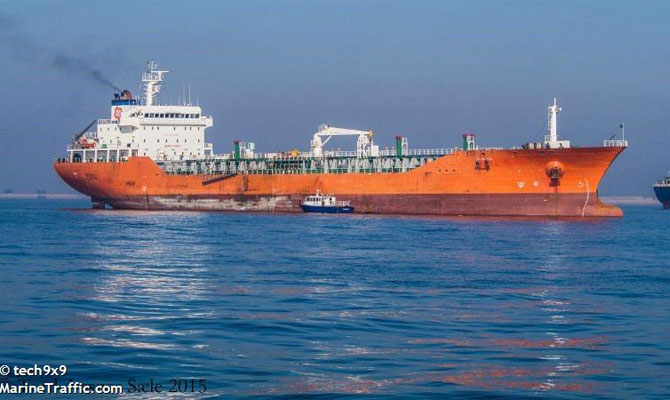