June 4 UPDATE:
700 kilos of cocaine on German container ship – fake staged by authorities?
Contradictory information was received from Maritime Bulletin reader on container ship VEGA MERCURY cocaine seizure by Algeria authorities. According to this information, the ship berthed at Oran on May 29 as usual, after she was berthed authorities ordered her to move to Oran anchorage, where something of a show took place, with Navy ship, helicopter and media footage. That’s what took place, according to reader. No crew were arrested, said reader. He added, that the crew didn’t know anything about the drugs found in meat boxes.
Full story: http://maritimebulletin.net/2018/06/04/700-kilos-of-cocaine-on-german-container-ship-fake-staged-by-authorities/

Container ship VEGA MERCURY was intercepted by Algerian Navy ship and helicopter off Oran, Algeria, on May 29, after Algerian authorities have been alerted by Spanish authorities on probable drugs shipment on board. More than 700 kilos of cocaine were found in boxes marked as “Halal Meat”, loaded into reefer container or containers. Container ship was taken to Oran and as of May 30, is berthed at Oran. 14 people were already arrested as suspects in drug trafficking. Seized cocaine originated from Latin America and most probably, containers were transshipped in Valencia, because VEGA MERCURY is a shuttle container ship trading in the Mediterranean.
The news wouldn’t be worth publishing – most part of trafficked in shipping containers drugs reach its’ destination anyway, without crew/owner involvement or knowledge, and we don’t even know the scale of the traffic, but in this case three crew were among arrested suspects. That’s unusual. Probably, it’s some kind of drug trafficking scheme, which requires crew cooperation
Container ship VEGA MERCURY, IMO 9403463, dwt 13702, capacity 1118 TEU, built 2009, flag Liberia, manager VEGA-REEDEREI GMBH & CO KG. 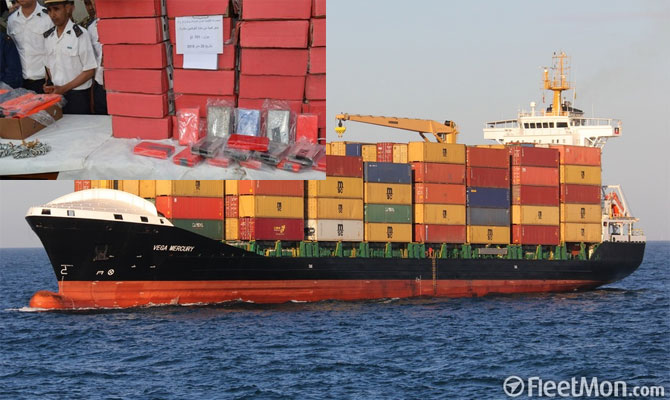