Latest update on MAERSK HONAM fire and its’ consequences for shippers, especially minor ones, those who shipped from one to ten containers, leaves them miserable.
The Loadstar latest: https://theloadstar.co.uk/shippers-cargo-maersk-honam-must-pay-get-released/
…
MSC, Maersk Line’s 2M partner, confirmed this morning that the vessel is due to finally dock at Dubai on 22 May, with discharging likely to take between four days and a week.
This week, vessel salvor Richard Hogg Lindley (RHL) fixed the salvage security at 42.5% of the cargo value, as well as requiring a further 11.5% as a general average deposit.
This means a shipper with goods worth $100,000 in a container faces a combined general average and salvage security bond bill of $54,000 to have the cargo released.
…
This is not all, though.
…
“We are therefore requesting an amount of $750 per 20ft or $1,250 per 40ft. This amount is destined to cover all additional transhipment, storage and on-carriage costs MSC will face as the result of this regrettable casualty.”
…
But what comes as a great relief and consolation is a profound “sorry, guys” from MSC.
…
“We are profoundly sorry for these additional costs which are imposed on us by the situation.”
…
Maersk sorrows, if any, weren’t mentioned, but we remain in belief that MAERSK is as sorry for its’ clients, as MSC is.
It’s an ordinary story which happens on quite a regular basis, if I am to believe the complaint letters from fuming with indignation minor shippers, be it MSC FLAMINIA, MOL COMFORT major disasters, or much smaller, going unreported, accidents, when one or two or several containers were damaged or destroyed.
I suppose some of those shippers, who shipped 1-2 containers on MAERSK HONAM, with not too expensive goods, will be better off, if they forget it all and write their stuff off – if indeed, they wouldn’t have to pay this bloody average bond under a court ruling.

Much can be said about the woes of minor clients of giant, monopolistic spiders like MAERSK or MSC or the rest of them. But it’s of no use and to no avail. If I am a minor shipper, shipping container with say, my home stuff, the whole scheme is very simple – my only guarantee is a prayer and a hope, that everything will go smooth without accident, or fire, or somebody’s negligence, which may lead to total loss of my stuff, or worse, entangle me in a situation like the one MAERSK HONAM containers owners found themselves in.
In the majority of the shipments, everything goes smooth or near-smooth. What are the numbers of those who suffered from some kind of accident, what’s the scale of it, we don’t know, because such data is guarded and hided more fiercely, than anything else. Strangely enough, those omnipresent hackers we’re threatened with constantly in these days, didn’t ever, anywhere, hacked such data and made it public – why, I wonder?

There’s literally, nothing ordinary person can do about his losses and woes, no place and no institution to look for justice, no safe or defence mechanism – nothing, big zero. If it’s a private small or middle-sized shipowner the minor shipper is dealing with, in case of an accident he, with high probability, will be compensated, fully or to some extent, or maybe even, left with a profit. But such shipowners are on the verge of total extinction as species, so to say. They’re already obliterated in liner deep-ocean shipping, long time ago. Now small shippers have to deal with faceless monsters, guarded by a complex safety net of laws and regulations. Ordinary person has no chance to stand up against those monsters.

Ocean-going container ships, the bigger the size, the bigger the threat, are vulnerable to explosions and fires, and there’s nothing, there are no realistic measures, which can prevent explosions and fires, from the moment the container with dangerous goods is loaded, until the moment it explodes, or inflames. It’s a plain fact, as plain as sun rising and going down, as two-plus-two is four, but nevertheless, it’s the fact, which nobody is admitting openly, or at least, raising doubts or alarm.

I believe, the only thing which may change it all for better, is the demonopolization of the industry, at least in its’ major sections, such as liner shipping, but it requires the severe global economy crisis, no less. I do believe also, that it will happen, rather sooner than later. There’s too much of socialism (monopolism if you wish, but socialism and monopolism are synonyms) around, to avoid the crisis. I’ve been living in Soviet Union, and it was economy which killed Soviet Union – socialist, alt-left economy, so I know the signs of looming disaster, I saw them before. 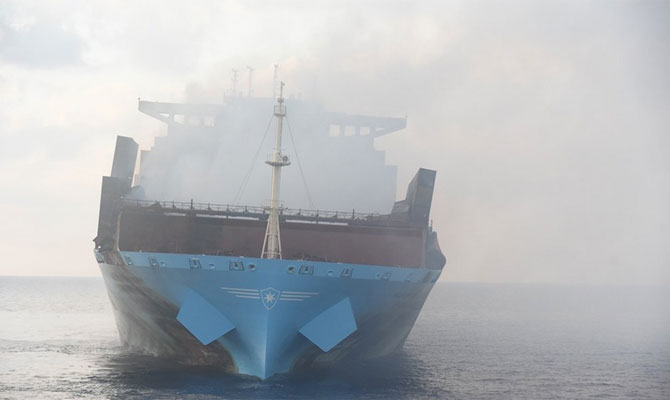