LNG tanker BORIS VILKITSKY recent accident renewed a fight between different governmental bodies and companies, engaged in Northern Sea Route (NSR) shipping. It unveiled quite a number of discrepancies and conflicts of interest, to such an extent, that Mr. Putin personally had to interfere and demand a green light to all LNG ice-breaking tankers, deployed in Yamal LNG project. Obviously, he and Kremlin are more concerned about LNG shipments and deliveries, than safety of Arctic waters, considering the importance of LNG trade for Russian shaky economy.
It all started with LNG tanker BORIS VILKITSKY being nailed as violator of safety rules by NSR Maritime Administration http://www.nsra.ru/ru/non_compliant_vessels.html

On the face of it, it’s the question of Arctic navigation safety, but just a slight scratch will reveal much more complicated picture. It’s a fight between fiefdoms of Putin’s tsardom for a leading role in NSR waters, namely between Atomflot (owner of all Russian nuclear icebreakers, the main icebreaking force on Arctic shipping lines), pretending at commanding role, and NSR Maritime Administration, which is the branch of Ministry of Transport, and should be, theoretically, the main and sole responsible body for NSR navigation and safety.
Atomflot said BORIS VILKITSKY deficiencies weren’t all that serious, tanker was still seaworthy and, so to say, iceworthy. NSR Maritime Administration accusations meanwhile, go far beyond inoperative stern thrusters and port steering column, because its’ inspectors found the whole bunch of other deficiencies on board of tanker, including lack of, or missing, charts; both Captain and crew lack of required ice navigation experience and training; other faults and deficiencies, both in crew and in mechanisms.
According to Kommersant Newspaper piece https://www.kommersant.ru/doc/3619227, Atomflot wants the same rights as NSR Administrations, and the same power, namely the power to issue certificates to merchant ships, authorizing them to navigate in Arctic waters. Atomflot wants to reduce the level of requirements, including the Ice Class grades, in order to attract more ships to NSR, and ideally, to become if not profitable, then at least, self-sufficient.
Manager and owner of Yamal LNG Project, NOVATEK, yells a bloody murder, fearing other interruptions in shipments, and not without reasons.

NSR, or at least, its’ navigational safety, needs one and only one responsible manager, to run and regulate shipping in most safe manner. But Kremlin’s ambition of making NSR an alternative to Southern ocean Route requires sharp increase in shipping volumes, and that’s exactly the idea, championed by Atomflot, with ensuing reduction of the level of requirements and restrictions.
NSR Maritime Administration seems to be most responsible body to ensure navigational safety, not interested in any financial gains, but this safety aim is at odds with Kremlin ambitions.

And of course, any obstacles, any delays in exploitation of already deployed LNG tankers on Yamal routes can’t be tolerated, given present Russian economical woes.
Quite a puzzle for Kremlin and Mr. Putin. I believe, with all said, that the safety will be compromised, as indeed, it already happens. Mr. Putin already said he won’t tolerate interruptions and obstacles in LNG Arctic shipments. Yet, more negative for safety, than Mr. Putin’s displeasure, is another fact:
From Arctic navigation safety point of view, inoperative thruster or steering column are less dangerous, than inexperienced Captain and crew. Dynagas is a Dynagas, Sinotrans, and China LNG Shipping Joint Venture. Who are the seamen, who’re manning Dynagas impressive fleet of LNG tankers, trading in Arctic waters? Are crews fully Chinese, or are they regular international mix, who’re the senior officers and most importantly, do those officers have required experience and training? 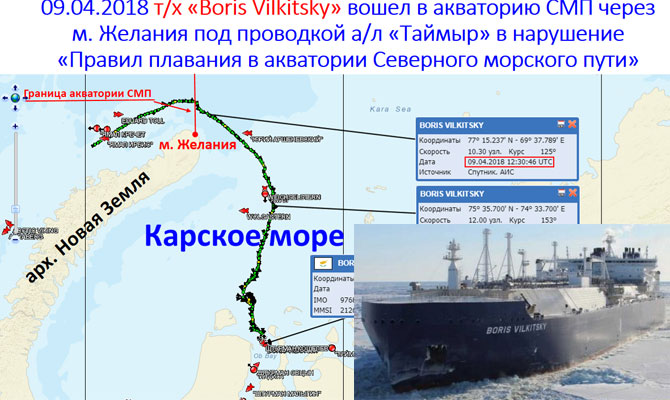