Ro-ro cargo ship under Russian name URAL but operated by Mersin-based Turkish company, arrested at Sfax, Tunisia, on Feb 15, was released on Apr 6 without her cargo of military equipment, which has been seized by Tunisian authorities. According to a number of reports, cargo was a complex shipment of everything required to set up military camp , including armored vehicles and weaponry. URAL sailed from Novorossiysk, bound for Douala, Cameroon, but Russia vehemently denied presence of any arms on board. But as vehemently, Tunisian sources insist on arms being part of the shipment.
Cost of seized cargo is some $4,15 mil. The ship left Sfax on Apr 6, bound for Alexandria, Egypt, ETA Apr 10.
Full story: http://maritimebulletin.net/2018/02/16/secret-russian-arms-shipment-cargo-ship-with-arms-detained-in-tunisia/
Ro-ro cargo ship URAL, IMO 7725386, GT 4994, built 1980, flag Panama, manager AKDENIZ RORO DENIZ TASIMA, Mersin, Turkey. 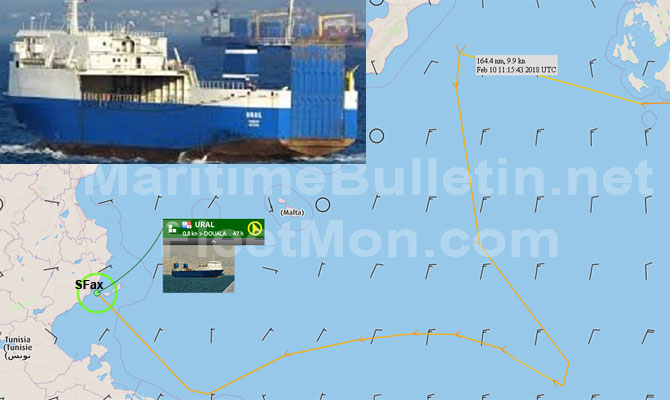