World shipping is under massive attack, ahead of IMO meeting on shipping emission cut. Major media fired a broadside, in valiant attempt to rescue Mother Earth from this dreadful shipping and greedy thugs who still run it.
“Ultimately, the most cost-effective approach would be to put a tax on carbon, and let that guide investment and innovation”, wrote Bloomberg https://www.bloomberg.com/view/articles/2018-04-05/greener-shipping-can-help-fight-climate-change , one of my favourites when it comes to media I distrust most. Yes, tax, or cash in control of those who run this Global Warming business, is the ultimate task, no doubt. Meanwhile, there are other proposals of measures which can be implemented in a very short time. Most popular are slower transits and/or bigger ships.

I don’t understand that slower shipping, somehow. I mean, we may reduce speed down to 2 knots, or simply tow those damn bulk carriers, tankers, container ships and tweendecks, which are poisoning atmosphere and killing all living things around them. OK. But what about carrying goods? Will we need 3 bulk carriers instead of 2, or 1, and if we do, will 3 slow-speed ships emit less gas than 2 cruising at normal, economically effective, speed? How will all broken shipment schedules and new, longer or much longer time of delivery, affect global economy, on what scale? Will it be disastrous, or nearly disastrous, or survivable? Do we have answers? I don’t, didn’t meet any yet.
As for bigger ships, let me illustrate the idea with one example:

One giant container ship can emit almost the same amount of cancer and asthma-causing chemicals as 50m cars (fifty million cars – M.V.), study finds
Confidential data from maritime industry insiders based on engine size and the quality of fuel typically used by ships and cars shows that just 15 of the world’s biggest ships may now emit as much pollution as all the world’s 760m cars.
Shipping is responsible for 3.5% to 4% of all climate change emissions.

That was published in The Guardian, and written by one John Vidal, environment editor. https://www.theguardian.com/environment/2009/apr/09/shipping-pollution
This 50 mil piece was enthusiastically re-posted, and is still re-posted, by other major media and not surprisingly, by industry media as well.
Can you, can anyone imagine 50 mil cars simultaneously, busily polluting atmosphere? I definitely can’t, I can’t imagine even several thousand cars stacked together – hundreds at most, stalled in Bangkok traffic jams. And I can see and feel their emissions, very vividly. I can, after that, go to Bangkok Sea Port, watch the ships, and compare. The difference will be startling, I guarantee. Yet according to environment experts and editors, I mustn’t believe myself.
Where did Mr. Vidal obtain that sensational information? Here: Confidential data from maritime industry insiders… Will I be correct in my assessment of all environmental experts and editors, as intellectual whores and downright freaks, if I identify my source of this assessment, as based on Confidential data from major media insiders? Is there any difference between trustworthiness of my claim, and theirs? I don’t see any.

That same major media is now campaigning for bigger ships, i.e. for those dreadful ships which pollute air more than all cars of the world, taken together. So much for major media trustworthiness and unbiased approach. And well, and just sound mind. They dumped common sense, common judgment, long time ago, being driven by their agenda and fat bonuses they get from the whole GW scheme. Mostly, they’re driven by pure greed, either for money, or for sensation and worldwide headlines, or for both.

But what about Global Warming itself, how real it is?

I’m giving below two links to two youtube videos (dated 2011) with GW discussion, lead by two of the most prominent Russian scientists, world-renowned academicians, Mr.Sergey Kapitsa, who was Russian physicist and demographer. and Mr. Andrey Kapitsa, who was a Russian geographer and Antarctic explorer, discoverer of Lake Vostok, the largest subglacial lake in Antarctica. Both were sons of Nobel laureate Soviet-era physicist Pyotr Kapitsa. The discussion was held soon after Mr. Andrey Kapitsa published first results of his more than two decades Antarctis ice research, based on Antarctic ice drill which took 20 years, drilling Antarctic glacial ice through all its’ depth, more than 3,700 meters. The discoveries they made during this drilling, based on ice samples, tell loud and clear, that there’s no GW threat in foreseen future, let alone GW caused by CO2 emitted by humankind.
It’s not all – they discussed Mr. Albert Gore presentation of GW and found Mr. Gore hopelessly ignorant in topics he was talking about. they discussed many other related things – videos aren’t long, some 9 minutes each, and though in Russian, all those truly interested may find ways to translate those videos.
https://www.youtube.com/watch?v=YoEqcMQ6nWo
https://www.youtube.com/watch?v=UM0bPXvCLas

It was claimed by all major media, and many times repeated, that some 98 percent of scientists back GW theory. (In Soviet Union or in modern North Korea, 98% was a standard percentage of those voting for Communist Party and national leaders – absolutely accidental coincidence, of course).
Is that major media claim true? Of course no, it’s a lie, so characteristic of today’s major.
The Global Warming Petition Project, also known as the Oregon Petition, is a petition urging the United States government to reject the global warming Kyoto Protocol of 1997 (and it was rejected by President Bush after he got acquainted with Petition) and similar policies.
The petition was organized and circulated by Arthur B. Robinson, president of the Oregon Institute of Science and Medicine in 1998, and again in 2007. Frederick Seitz, then the chairman of the George C. Marshall Institute, wrote a cover letter endorsing the petition.
We urge the United States government to reject the global warming agreement that was written in Kyoto, Japan in December, 1997, and any other similar proposals. The proposed limits on greenhouse gases would harm the environment, hinder the advance of science and technology, and damage the health and welfare of mankind.
There is no convincing scientific evidence that human release of carbon dioxide, methane, or other greenhouse gases is causing or will, in the foreseeable future, cause catastrophic heating of the Earth’s atmosphere and disruption of the Earth’s climate. Moreover, there is substantial scientific evidence that increases in atmospheric carbon dioxide produce many beneficial effects upon the natural plant and animal environments of the Earth.
As of 2013, the petition’s website states, “The current list of 31,487 petition signers includes 9,029 PhD; 7,157 MS; 2,586 MD and DVM; and 12,715 BS or equivalent academic degrees. Most of the MD and DVM signers also have underlying degrees in basic science.
https://en.wikipedia.org/wiki/Oregon_Petition

And finally, some facts on shipping emissions:
Shipping’s contribution to atmospheric CO2 levels is currently around 2.3% of all man-made CO2 emissions but these themselves only amount to about 2 – 3 % of all CO2 with around 98% being quite natural. On that basis shipping is responsible for less than 0.05% of all CO2 emissions and, as the Tony de Brum declaration recognizes, is an essential industry for almost all nations regardless of the developmental status. 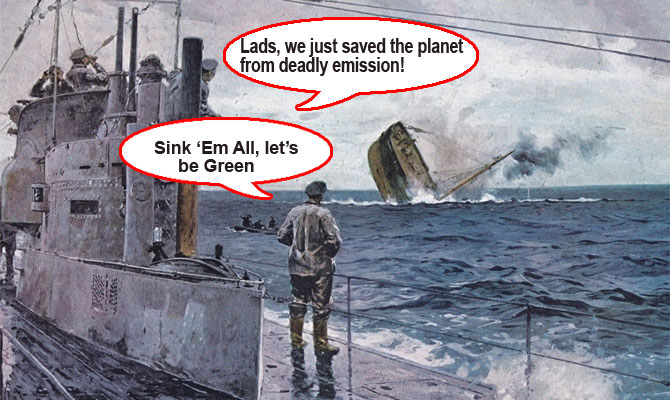