Apr 9: Cargo ship URAL with Russian military cargo released, $4 mil cargo seized
Ro-ro cargo ship under Russian name URAL but operated by Mersin-based Turkish company, arrested at Sfax, Tunisia, on Feb 15, was released on Apr 6 without her cargo of military equipment, which has been seized by Tunisian authorities. According to a number of reports, cargo was a complex shipment of everything required to set up military camp , including armored vehicles and weaponry. URAL sailed from Novorossiysk, bound for Douala, Cameroon, but Russia vehemently denied presence of any arms on board. But as vehemently, Tunisian sources insist on arms being part of the shipment.
Cost of seized cargo is some $4,15 mil. The ship left Sfax on Apr 6, bound for Alexandria, Egypt, ETA Apr 10.

Feb 25: Cargo ship URAL with Russian military cargo still held by Tunisia
Russian major media on Feb 24 exploded with news on detention of ro-ro URAL in Tunisian port of Sfax, referring mostly, to Maritime Bulletin as an initial source. Media contacted Russian Embassy and Ministry of Foreign Affairs, which made curious statements and said, that “Maritime Bulletin wasn’t correct in details”. According to MOF statements, earliest and latest, the ship called Sfax because: a) she was caught in storm off Safx; b) because she was in need of repairs, make your bet.
In its’ latest statement, MOF claimed, that the cargo was absolutely civil one, there’s nothing military on board. According to Tunisian media and sources, cargo consists of military trucks and armored vehicles, bulldozers, ambulances, tank trucks, electric generators, military uniforms and radio and satellite communication equipment – everything one needs to build up militant camp. The cargo wasn’t properly documented, part of it wasn’t documented at all.
My best guess is, the ship ran into trouble of mechanical character in Ionian sea, but was still under way, in need of repairs which require shelter, in form of port or at least, anchorage. But URAL couldn’t call any nearest European port, fearing inspection and possible detention, probably something worse than detention. URAL reached Libya, with apparent intention of calling Libyan port, but again, feared possible negative outcome, and finally, anchored off Sfax.
I believe, Russia and Tunisia, at present, are in the process of negotiations, with Tunisia attempting to make most of it, and grab some kind of reward – say, hefty fine, or some political/economical preferences.
The ship is still at Sfax, as of morning Feb 25.

Feb 16:
Update: According to Tunisian sources, military trucks, armored and military personnel armored vehicles were found on board, also 24 containers with ammunition, all military cargo said not to be properly documented, destination of shipment unclear.

Ro-ro cargo ship under Russian name URAL but operated by Mersin-based Turkish company, was detained in Sfax port, Tunisia, for a thorough search and check, having on board, according to locals, cargo of arms and ammunition. The ship is en route from Novorossiysk Russia to Douala Cameroon, Tunisian sources said she interrupted voyage and called Sfax, because of mechanical failure which has to be repaired.

Comment:
Judging from ship’s track, the whole story sounds and looks rather curious, to say the least. The ship apparently experienced some trouble on Feb 9, while sailing in Ionian sea, which is in itself strange – the straight route lies through Med, why taking to northwest? URAL crossed most part of Ionian sea at a reduced speed, and then made a sharp turn, heading south to the shores of North Africa, looking like she’s going to call Libyan port. Then again, a sharp turn west, in direction of Tripoli. On Feb 13 URAL made up its’ mind, finally, and headed for Sfax, arriving on Sfax road on Feb 15. Later she moved into the port and was moored. As of 1700 UTC Feb 16, URAL is still docked at Sfax, situation being unclear, status of the ship unknown. 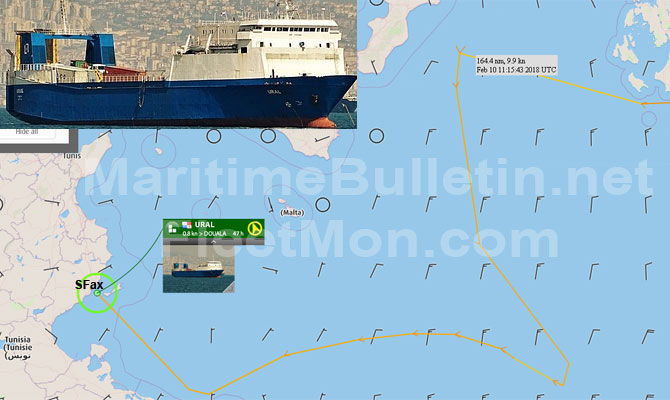