North Korean passenger cargo ship MANGYONGBONG issued distress signal at 0935 Vladivostok time (0235 Moscow time) Feb 3, reporting unbearable situation on board – fuel ran out, the ship doesn’t have power for 1.5 days, in severe weather conditions with temperature well below freezing point (-14C as of morning Feb 3). The ship is stuck in ice in one of Vladivostok’s small bays (Bay Tikhaya – Quiet), authorities didn’t yet complete formalities, MANGYONGBONG not allowed to berth. Coast Guard said its’ team can’t reach the ship to clear her for entering port, because of ice, which is preventing boarding. Master is demanding permission to be berthed, immediately, because the ship and the crew are actually in distress.
Ferry line between Rajin (Rason) port, North Korea, and Vladivostok, was launched in May with much fanfare, but “something went wrong”, and mishaps are besieging the ship and its’ operator, Vladivostok-based company Investstroytrest.
Read and see more on the ship and ferry line: http://maritimebulletin.net/2017/05/18/mangyongbong-arrival-launched-north-korea-russia-ferry-line/
Schedule and services description here: http://rajin-investstroytrest.ru/51-predlojenie_2.html
Passenger cargo ship MANGYONGBONG, IMO 7111406, GT 3317, built 1971, flag North Korea, operator Investstroytrest: rajin-investstroytrest.ru. 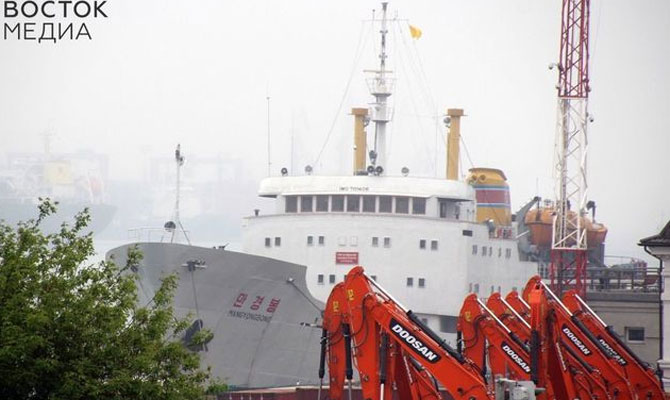