Part of the equipment included in the first shipment of the S-400 air defense missile systems, which was sent to China under the 2014 contract, has been damaged by a storm and returned to Russia, the press service of the Federal Service for Military-Technical Cooperation told TASS on Jan 19.
“In order to implement a contract on supplying the S-400 air defense missile systems to China, a vessel carrying support equipment departed from the Ust Luga port in the Leningrad region in late December. However, on its way to China, the vessel got caught in a strong storm, which damaged part of the equipment. A decision was made to return to the port of departure,” the press service said.
Work is currently underway to assess the damage in order to make it possible to cover losses in accordance with insurance. After the work is completed, undamaged equipment will be sent to the customer, the Federal Service for Military-Technical Cooperation added.
http://tass.com/defense/985944

Cargo ship in question wasn’t identified. The statement was issued with such a delay as most probably, an attempt to soothe China, and probably, because there were fears news would somehow leak out, anyway. The ship wasn’t identified because of secrecy reasons – this ship, and other ships belonging to the owner, may be involved in covert arms trade. If disclosed, this one and other ships would be exposed to constant monitoring, rendering the whole fleet and the owner useless for further arms trade.
The ship in question is general cargo ship NIKIFOR BEGICHEV, which sailed from Ust-Luga on Dec 30, destination China. During the night Jan 3 ran into storm and experienced trouble with bulky cargo on cargo deck. The ship was drifting for some time, and at around 0500 UTC Jan 3 turned back. The extent of damages sustained by ship is of course, unknown. She returned to Ust-Luga anchorage on Jan 9. As of 1700 UTC Jan 19, NIKIFOR BEGICHEV was still at anchor on Ust-Luga anchorage. Photo from http://fleetphoto.ru 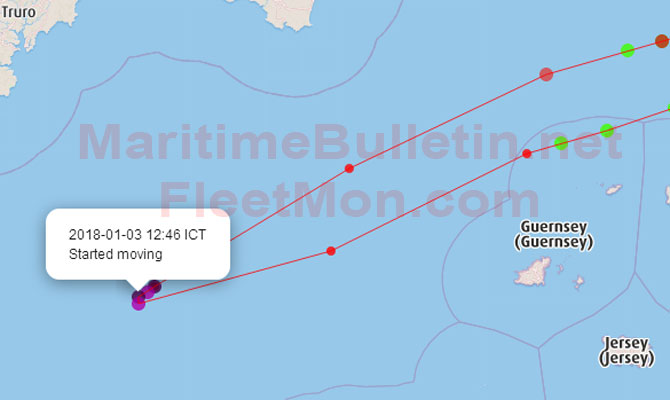