General cargo vessel ANDROMEDA was intercepted by Greek Special Forces on Jan 6 off Agios Nikolaos, Crete, Greece, Sea of Crete, on suspicion of arms trading, and taken to Heraklion port, Crete, for thorough check. There were 29 containers, loaded with explosives and detonators, destined for Djibouti and loaded at Mersin, Turkey, according to cargo papers. During inspection proofs were found, that the Master was to take vessel to Misurata Libya, to offload explosives, which is prohibited by internationally imposed sanctions. In addition, no maps of Djibouti were found. All 8 crew, including 2 Ukrainians, 5 Indians and 1 Albanian nationalities, were put under arrest. Cargo and ship are seized. On a photo one of confiscated containers loaded with explosives.
General cargo vessel ANDROMEDA, IMO 7614666, dwt 2155, built 1979, flag Tanzania, manager ANDROMEDA SHIPMANAGEMENT SA, Greece. 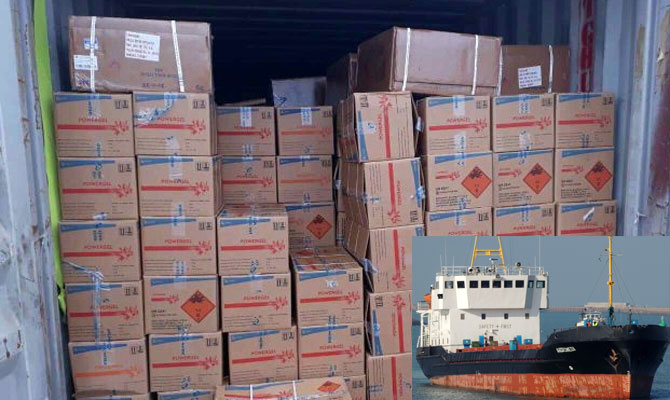