Public interest in Kra Canal project goes in tides, and as of recent, it’s on the rise again. Project has a long history going centuries back, there’s no need in trying to retell it one more time. Kra Canal is a waterway to be built across the Kra Isthmus on the Malay Peninsula in southern Thailand, and become the shortest link between South China sea and Indian ocean, which in theory, may overshadow Malacca Strait. Kra Canal transit will be some 650 nautical miles shorter than Malacca Strait transit, saving 2-3 days sailing.
A lot was written and said on pros and cons, on advantages and risks involved, but still, some risks weren’t mentioned, or were taken too lightly.

Some aspects of Kra Canal Project economic:
Let’s take some standard average ship consuming 40 tons of fuel per day, at an average price $450 per ton it’s $18,000 daily. 3-day route saving worth is $54,000. Applying these figures to Kra Canal will leave us with transit toll not exceeding $55,000, at higher toll transit just doesn’t make sense. Average Suez Canal toll in 2015 was $296,000, with average 48 daily transits.
Year 2015 Suez Canal totals: 17,483 transits; total revenue $5,175 billion.
To achieve $1 billion annual revenue, Kra Canal will need at least 18,000 annual transits, some 50 transits daily.
Actually, of course, time saving will be less than 2-3 days, because crossing canal is not equal to crossing Strait – vessel will have to anchor, complete formalities, wait for its’ turn, take pilot on board and then disembark him, etc.
What’s maximum capacity of projected Kra Canal, is yet unknown, but expectedly, it shouldn’t be less than 100 ships per day.

Some 300 ships transit Malacca Strait every day, and according to latest studies, maximum capacity of the Strait, some 335 ships daily, will be reached by year 2020, so there’s no fear of lack of traffic, the demand theoretically, exceeds Canal capacity.
$450 per ton of bunker fuel is today’s cost – November 2017, but nobody knows, what will be the cost in next month, or next year, let alone next decade. It may be 4-5 times less than it is now, if (or when) crude oil price goes down to what’s really worth, some $10-20 per barrel, not more. Crude oil is a renewable fuel, a fact which is hard to hide or deny, as the time passes. There’s plenty of oil around, with no shortages risks in the foreseen future.
Bunker cost is directly influencing Kra Canal economic – if fuel cost is some 4-5 times less than it is now, it makes Canal far less profitable, and probably, not a viable alternative to other passages, including Sunda and Lombok Straits.

Everybody is expecting the increase in Malacca Strait traffic with coming years, at a present rate, but things may change in near future, and cargo flow in western direction, from Asia to Europe, may if not fall, then at least, remain stable. Let’s not forget potential game-changers, 3-D printing and robotized factories, which may (and will) annihilate Asian production, based on cheap labor. Asian products won’t be cheapest anymore, and what’s maybe more important, 3-D printers may come as a final solution for many consumer goods. Why should I bother myself with wandering around in supermarkets, lost in plethora of goods, mainly produced in Asia, if I can find the best for me design in Internet, and print exactly what I want either on my home printer, or at neighbouring print shop?

And of course, there are geopolitical and military risks to consider.
China is going to be the main, if only investor in the project, explaining its’ interest in Kra Canal by much-advertised Great Belt and Silk Road Initiatives. China is ready to finance the project and provide all necessary technologies, expertise, and specialists, both during construction, and in exploitation of the Canal.
The Chinese proposal envisioned a 10-year construction project manned by approximately 30,000 Chinese workers at a cost of $20 billion to $25 billion.
For all practical purposes it means, that Thailand will get some kind of Chinese enclave in its’ heartland, with quite a number of possible negative consequences.

Many military and geopolitical experts explain Chinese interest in Kra Canal by its’ aspiration to get a controllable link between Pacific and Indian oceans, bypassing Malacca Strait, which is considered by experts as controlled by the USA or its’ allies. China, they say, will get a safe passage for its’ Navy and merchant ships with strategically important goods, such as oil. China, with Kra Canal and artificial islands in the middle of South China sea, will control South China sea and some of the main global sea routes, they say.
I don’t believe it’s all that important in present times, it’s an expertise from past times. It’s an outdated thinking, if you ask me. I don’t believe in any full-scale, all-out military conflict between China and USA, either. Why bother with all those noisy and polluting missiles, guns, torpedoes and troops bravery, when one simple act of cutting China from Internet and world finance system will plunge the whole country into chaos?
And by the way, how China can possibly control South China sea routes, in our times? By intercepting each and every freighter and checking its’ holds? It’s not Napoleon era, wake up.

But for Thailand, those super powers games may come very risky. Say, China – USA or China – India relations will deteriorate to a stage of highly probable military conflict. Little doubt as to what USA or India will ask from Thailand – they’ll ask Thailand to close Canal for all military transits, except Thai Navy. No doubt, China will be strongly against it, considering Canal as China’s strategic asset.
Thailand may find itself in exactly the same situation it experienced during WWII, when being caught between two fires, Japan and Allies, the country had to choose – either to sign a treaty with Japan and allow Japanese troops transit to Malay Peninsula, or face military invasion. Thailand signed a treaty, and barely avoided finding itself on the same bench with Germany and Japan in post-war era.
Thailand was never occupied in its’ history, thanks to its’ political skills and lucky geographic location, which is on the outskirts of Asian mainstreams. Isn’t it better to keep it this way?

As an expat residing in Thailand for soon a decade, I see inclusion of Thailand into Asian mainstream as a major gain Kra Canal may bring. No doubt, Canal may become economically effective, providing all required factors will be favorable. But just one risk coming true, from those listed above, may counterbalance all gains.

A comprehensive study is apparently, what this Project needs most of all, study which will embrace all possible risks and gains, with evaluations of every possible outcome. Securing unbiased approach seems to be the main problem while conducting the study, because there are too many suspiciously enthusiastic supporters of the project, especially among CEOs of major transnational corporations, geopolitical experts, and media. 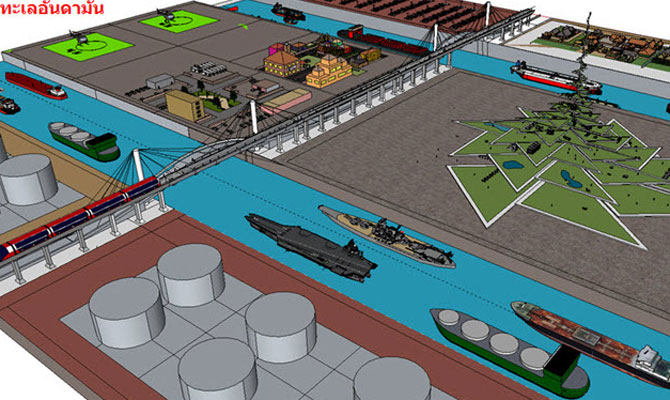 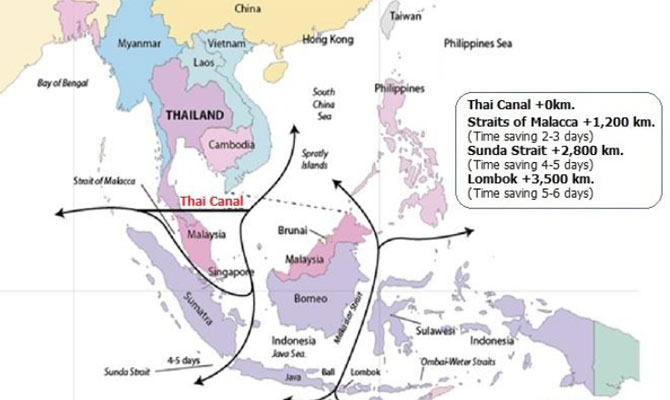