Nov 20 CNN latest:
(CNN)Argentina’s navy on Nov 20 picked up what could be noises from the country’s missing submarine and said the sub’s captain reported a “failure” in the vessel’s battery system before it disappeared.
The sonar systems of two ships detected noises sounding like tools being banged against the hull of a submarine, according to a senior US Navy official familiar with the Navy’s assistance in the search for the vessel.
The official said that crews of submarines in distress bang on the vessel’s hull to alert passing ships to their location. The missing submarine — the ARA San Juan — has a crew of 44.
The Argentinian navy was able to fix the rough location of the sounds and is now concentrating its search in an area of 35 square nautical miles approximately 330 miles off the coast of Argentina, the official said.
Hopefully, this is it, and submarine is to be located soon. After it’s found, crew life-support may be provided with connections providing air, power, some supplies and warmth – crew should be freezing down there, it’s one of the main risks in case of a major accident. Much will depend on the depth, the more is the depth, the more difficult is the task of getting sailors out.

Nov 20 Update: No news on any traces found, signals detected on Nov 18 probably originated from other source. News are mostly related to search operation, describing extra resources which were deployed recently, and new areas designated for search. Argentinian Navy Command didn’t yet reveal most vital information – underwater survivability deadline, based on all known to Headquarters data (batteries charge level, time she was underwater prior to missing date/time, her max present underwater survivability, etc.); and most probable depths she’s on (below or above crush depth). Argentinian Navy Shipyard engineer said “reserves of oxygen allow submarine to stay underwater for several days”. It may be up to 10 days, then?

Nov 19: Seven indistinct satellite signals were detected by Argentinian Navy on Nov 18, rekindling hopes of SAR success. No details were given with regards to these signals, except that signals may indicate, that the crew is trying to re-establish contact, so Navy is working to locate the source of the emissions. Could those signals be sent from submarine itself, or could they be signals sent by damaged emergency buoy on the surface, with malfunctioning communication equipment? Was the buoy – if it was a buoy – already surfaced, or did crew manage to release the buoy, is it attached to submarine, or is it drifting? There are just too many options to build up more or less plausible version, so all we can do is again, hope and pray.
If all communication equipment is inoperable or malfunctioning, there’s only one way for the crew of disabled submarine resting on bottom to alert rescuers and indicate its’ position. The one which was used since the first known submarine disasters in early 20-th century, and rescued many lives. It’s sound – making noise just by banging something metal against submarine’s steel hull.

Nov 18 evening: According to latest news evening Nov 18, no trace of ARA SAN JUAN found yet. Argentinian Navy Command said some 80% of the area of submarine’s possible position were already searched.
Most important questions now are the underwater endurance of ARA SAN JUAN, and the depth she’s in. Here’s more detailed description of TR-1700-class submarine:
The submarine was designed by Thyssen and its features include high underwater speed, endurance (for a diesel submarine), and survivability. The boat’s four MTU diesel engines, four generators, and Siemens electric motor can propel it at speeds up to 25 knots (46 km/h; 29 mph). Eight 120-cell batteries are installed on each boat. They have a diving depth of 300 m (980 ft). Normal endurance of these boats is 30 days with an extended range up to 70 days.
I’ve been trained as a reserve officer (all Soviet Merchant Marine officers were), Commander of Battle Station 1, diesel submarines, and served several months on board of Soviet Foxtrot-class submarine, with maximum underwater endurance of 3-4 days, without snorkel use. After that, you have either to surface, or to die. 30 days endurance for a conventional diesel submarine, not AIP, sounds fantastic for me, but who knows. Of course we have to forget about snorkel, ARA SAN JUAN can’t use it. If ARA SAN JUAN is capable of staying underwater for about a week or more, and if the disaster which befell her doesn’t sink her, killing most or all crew, then there’s still a good chance of survival and rescue, I believe.

Nov 18 Latest: The International Submarine Escape and Rescue Liaison Office (ISMERLO), organization dedicated to the search and rescue of sunk submarines around the world, claimed it detected ARA SAN JUAN about 300 kilometers east of Puerto Madryn at some 70 meters depth. No confirmation yet, official news say submarine search continues. If submarine is really found at 70-meter depth, there’s a good chance of rescuing the crew.

Nov 18: Full-scale SAR is under way in waters near the last known position of missing submarine, including all available Navy ships and planes, and merchant marine and fishing vessels in the area. There are 44 crew on board, initial reports mentioning storage battery fire weren’t not confirmed by latest updates, but weren’t renounced, either. Emergency beacon didn’t surface (which is very upsetting by itself – it happens, like in some cases with USSR Navy submarines, but quite rarely), and that seems to be the main problem – rescuers don’t know exact position of the submarine, and therefore, can’t locate her. All those who offered help in rescuing submarine, including Chile, Uruguay, Brazil, Peru, the United States, Great Britain and South Africa, can’t do much until submarine is found, unless they are capable of a quick delivery of search and detection equipment and specialists.
Argentinian Navy Command kept it secret maybe for too long, for two days, and in all probability, could continue hiding the accident, if not crew families worries, which inevitably, would leak the news. It’s a curse of all or nearly all Navies, they’re too secretive, risking the lives of the sailors or sacrificing them, in the name of honor and reputation. More often, than not, it’s not honor, it’s fear of Navy Brass of possible repercussions.

Nov 17 news:
Argentina Navy submarine ARA SAN JUAN disappeared in waters of Puerto Madryn, northern Patagonia, Argentina, contact with submarine manned with 40 crew lost since Nov 15. It was said that submarine was already located and taken on tow, being disabled after fire, but according to most recent news, citing Navy officials, submarine wasn’t found, her fate, and fate of the crew, unknown.
On a photo Eliana Maria Krawczyk, one of the crew of the missing submarine in officer’s rank.
Submarine ARA SAN JUAN, TR-1700-class diesel-electric submarine in active service with the Argentine Navy, built 1983, displacement: 2140 tonnes (surfaced) 2336 tonnes (submerged), armament torpedoes. 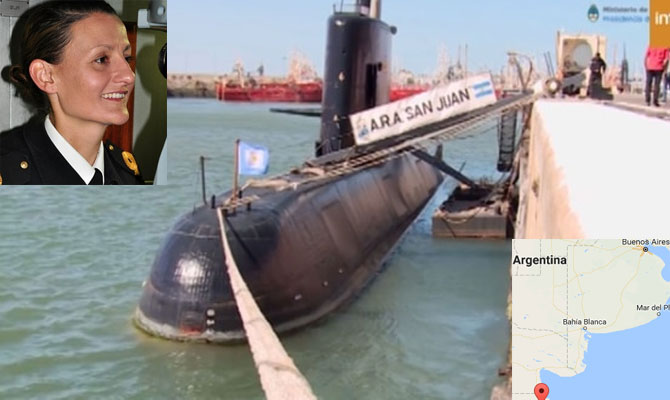 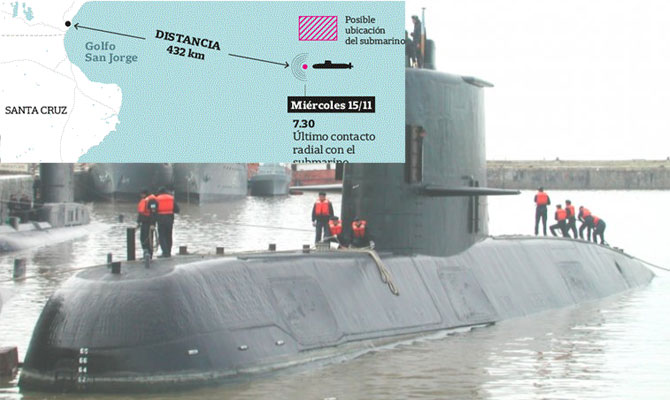