Bulk carrier VENUS BAY was attacked and boarded by armed pirates at 0822 UTC Nov 11, while drifting in position 04 07N 007 00E, some 23 nm south of Bonny, Bight of Bonny, Gulf of Guinea, Nigeria. Pirates broke into bridge and opened fire, damaging windows. They stole some ship’s property, robbed crew of their cash and belongings, and kidnapped 10 crew. Nigerian Navy ships intercepted boat with pirates and hostages, freeing hostages and seizing 5 pirates. Bulk carrier with armed guards on board was escorted to Port Harcourt, ship’s port of destination, arriving there on Nov 12. As of 0300 UTC Nov 14, VENUS BAY was berthed at Harcourt. Probably crew consisted mostly of Indian nationalities, considering Indian V SHIPS management.
No other details available, no statement as to the condition of the crew. hopefully, they’re all well. Details of Navy skirmish with pirates also unavailable, though it’s very important, for the sake of the crews which may and in all probability, will, be attacked and kidnapped in the future.
Bulk carrier VENUS BAY, IMO 9414450, dwt 30003, built 2012, flag UK, manager PIONEER MARINE ADVISERS PTE. 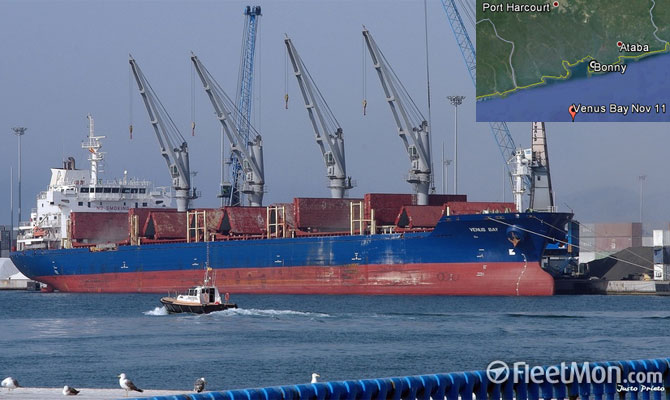