Explosion with ensuing fire occurred on board of a tanker berthed at Koole Terminals, Vondelingenplaat, Rotterdam, in the afternoon Oct 19. Flame of 50 of meters high was visible from afar. One crew was injured and taken to hospital. Fire engines were called, as of 1500 UTC situation unclear, probably fire is under control or already extinguished. The name of the tanker not revealed yet, but according to AIS and photos it’s either ATLANTIC SYMPHONY or MANAS, with ATLANTIC SYMPHONY being berthed and MANAS moored at her side. Most probably though, tanker in question is ATLANTIC SYMPHONY, because it is said, that the tanker is loaded with coconut oil. ATLANTIC SYMPHONY arrived to Rotterdam from Port Klang Malaysia, MANAS arrived to Rotterdam from the UK. On photos fire on either ATLANTIC SYMPHONY or MANAS. All photos http://www.rijnmond.nl/nieuws/160421/Steekvlam-van-vijftig-meter-bij-brand-op-schip-Vondelingenplaat
Product tanker ATLANTIC SYMPHONY, IMO 9464560, dwt 36684, built 2009, flag HK, manager CIDO SHIPPING HK CO LTD.
Product tanker MANAS, IMO 9447055, dwt 10744, built 2008, flag Malta, manager TUNE CHEMICAL TANKERS BV, Netherlands. 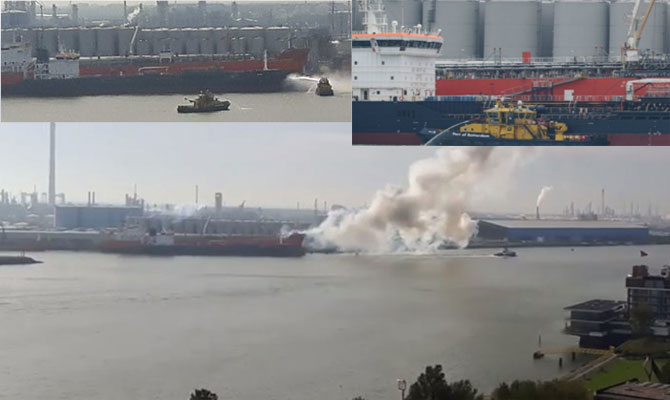