Incident with German “charity rescue boat” LIFELINE on Sep 26 as described by most media citing Axel Steier, a spokesman for the German-based charity:
The Libyan navy is threatening to seize charity rescue vessels in coastal waters after it fired a shot and boarded a German boat that had saved 52 migrants. The German charity, Mission Lifeline, said the incident occured in international waters that the Libyan navy has claimed as a search-and-rescue zone under its responsibility.
“The Libyan man said: ‘This is our territory,’” said Axel Steier, a spokesman for the German-based charity that performed its first rescues on Tuesday.
“After a while, they fired shots,” he said, probably into the air or sea. No one was wounded. Afterward two Libyans boarded the Lifeline ship to try to persuade them to hand over some 70 migrants they had just taken off a wooden boat in international waters. “We told them we don’t return migrants to Libya. After a while, they gave up,” Steier said. The two men spent about 15 minutes on board, he said.

But some facts tell us a different story:
The first wooden boat “discovered” on 26.09.2017 was at no time in danger of sinking or in any type of distress. The wooden boat was seaworthy and equipped with a fully functional engine, simply waiting for an NGO ship in a prearranged area. The migrants showed no medical emergency. (see “Lifeline photos) The sea state at the time: light breeze, weather: clear. This particular boat was recovered in Libyan contiguous zone only 22.3 NM from the shore (see map) All migrants were transferred on-board the German NGO ship “Lifeline”. The migrant boat was later proforma destroyed.
What followed was a legal intervention of the Libyan Coast Guard against lawless behavior of the German NGO vessel and her Captain Friedhold Ulonska, who did not stop his vessel when called to and at the same time refused to establish a basic marine radio contact with the LCG vessel.
In addition the German NGO vessel conduct was in violation of EU Council Directive 2002/90/EC.
“Legal authority of a coastal state may stop and board in contiguous zone (24 NM) any foreign vessel suspected of immigration infractions” (UNCLOS 1982 Art. 33)
Source: Migrant Rescue Watch https://twitter.com/MigrantWatch/

Charity NGO was lying – the ship was in international waters, but at the same time, in contiguous zone (24 NM). Illegal migrants weren’t in distress, it was a routine NGOs’ taxi service, in violation of the whole bunch of laws.

Some other stories unmasking criminal activities of NGOs:
* Save The Children workers are seen ‘co-operating with human traffickers’ in the Mediterranean in footage broadcast on Italian TV:
http://www.dailymail.co.uk/news/article-4921986/Save-Children-accused-pockets-smugglers.html
* Footage of Italian TV Matrix shows the good cooperation between the vessel of “Save The Children” & migrant smugglers:
https://twitter.com/OnlineMagazin/status/911917999338278913
* Captain of “Save The Children” ship “Vos Hestia” under investigation for facilitation of illegal migration:
http://www.lasicilia.it/news/trapani/108896/inchiesta-su-recupero-migranti-indagato-comandante-nave-stc.html 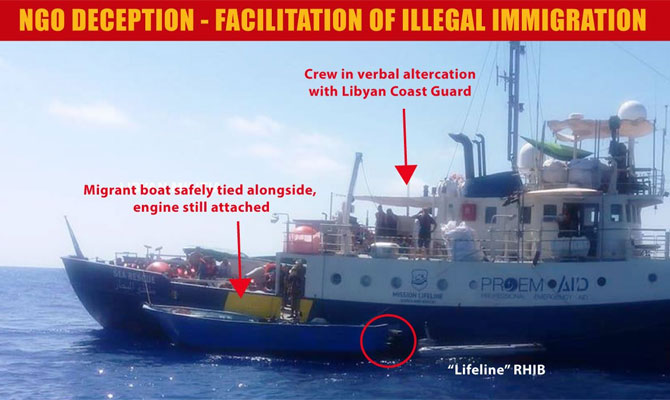