Bulk carrier COPAN arrived at Mariupol port, Ukraine, Azov sea, on Aug 30 and left on Sep 1, transiting Kerch Strait, both ways after the railway arch of Kerch Strait Bridge was installed. In order to pass under the arch, vessel had to shorten top of her bridge mast, see photos below.
According to Ukraine Maritime Authorities, Ukrainian Azov sea shipping is to be negatively affected by the Bridge. Panamax bulk carriers, previously calling Mariupol Port, won’t be able to transit Kerch Strait any more, because of air draft restrictions. Arch height above the water is 35 meters, such height is blocking passage for vessels bigger than handysize, though COPAN, being handy, had to cut off mast top, anyway.
Russian ports in Azov sea won’t suffer from those limitations, because they’re limited by small approaches depths, ports can’t handle vessels bigger than average general cargo ships up to 7-8 thousand tons deadweight. The majority of vessels handled by Russian ports in Azov sea, are so-called “river-sea” type vessels, with several meters air draft, and special type of masts, which can be brought down while passing under river bridges.
Russia didn’t consult Ukraine and international maritime community on that bridge construction, and its’ negative consequences it already brought upon regional shipping. The construction itself is a belligerent violation of international laws and the right of free passage, not to mention annexation of the Crimean Peninsula, which alone makes bridge illegal.
Quite a number of Russian scientists and experts were strongly against Kerch Strait Bridge project, slating the whole idea as crazy. Germany during WWII started to build a wooden bridge across Kerch Strait in 1943, but didn’t finish it. Stalin did. The bridge didn’t last long, it was destructed by ice floes in early 1945. There is a very unfavorable for construction geology there, with very deep layer of mud, a lot of dirt volcanoes, risks of underwater quakes and soil shift, plus the threat of destructive drifting ice floes in winter season. Russian and Ukrainian experts believe, that the bridge is doomed.
On photos COPAN leaving Mariupol on Sep 1, and COPAN standing tall.
Bulk carrier COPAN, IMO 8515025, dwt 17777, built 1986, flag Belize, manager ANMAX TRADING CORP PTE LTD, Singapore. 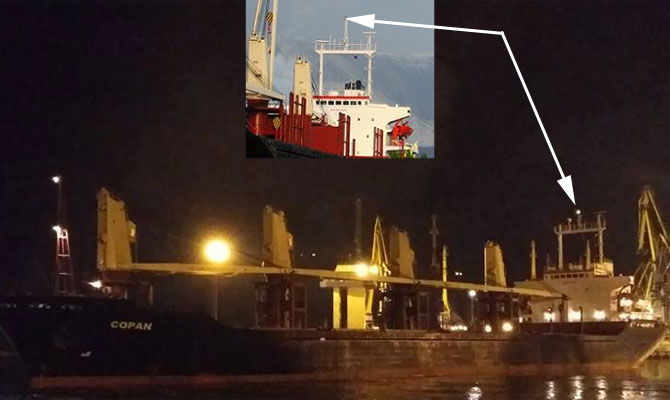