As of 1630 UTC Aug 24, bulk carrier CHESHIRE, on tow of tug JACQUES 2, was in position 26 59N 016 22W, 70 nm southwest of Maspalomas, Gran Canaria, proceeding due east at some 3 knots speed, to a designated area 40 nm (other sources put this area some at 60 nm distance) south of Maspalomas. 3 other SAR tugs are escorting the convoy.
No team boarded vessel yet. Canary Islands authorities found no danger in positioning CHESHIRE 40 miles off Gran Canaria, because for them, the only danger is toxic fumed billowing from vessel’s holds. All holds save No.1 and No.2 are already declared to be safe, as chemical reaction ended with cargo total decomposing, and the ferocity of decomposition in Holds 1 and 2 is, as they say, nowhere close to decomposition in Hold No.4. What makes Holds 1 and 2 decomposition so different from the one in Holds 3,4 and 5, is anyone’s guess.
A safe 3-mile zone will be designated around and above CHESHIRE, which surely, will secure all passing by ships, and flying over aircraft, from toxic fumes. Will this zone secure ships, planes and Gran Canaria itself from a major explosion, if god forbid, it happens?
I’ve been trying to understand, what’s going on in CHESHIRE holds, and how dangerous it is. That’s what I found out:

Decomposition creates toxic gases containing ammonia and nitrogen oxides. The resulting nitrogen oxides will support combustion, even in the absence of other oxygen.The resulting heat and pressure from the decomposition of ammonium nitrate may build up if the reaction takes place in a confined space and the heat and gases created are not able to dissipate. As the temperature rises, the rate of decomposition increases. In a confined space, the pressure can reach dangerous levels and cause an explosion that will include the detonation of the ammonium nitrate. When dealing with a large quantity of ammonium nitrate, localized areas of high temperature may be sufficiently confined by the mass of material to initiate an explosion. The explosion of a small quantity of ammonium nitrate in a confined space may act as a booster charge and initiate the explosion of larger quantities.
https://www.quora.com/What-is-the-decomposition-of-ammonium-nitrate
Ammonium nitrate decomposes into the gases nitrous oxide and water vapor when heated (not an explosive reaction); however, it can be induced to decompose explosively by detonation. Large stockpiles of the material can be a major fire risk due to their supporting oxidation, and may also detonate, as happened in the Texas City disaster of 1947, which led to major changes in the regulations for storage and handling. – Wikipedia

There already were explosions in Hold 4 soon after reaction started on Aug 13. They didn’t lead to a major explosion, and hopefully, there won’t be one until all cargo melts down. But according to available information on ammonium nitrate character, major explosion may still take place.

There’s another risk, already voiced by Canary Islands Fisheries Association – they fear, that possible sinking of CHESHIRE, with all its’ cargo, melted and not, will lead to ecological disaster. They strongly object granted by authorities permission to carry out salvage operation near islands.
Is there a danger of CHESHIRE sinking even without major explosion (well, judging from records of Texas City explosion, there won’t be much left to fear sinking)? Yes, there is. Decomposition of ammonium nitrate is a thermal reaction, running at a high temperature, and the higher is the temperature, the quicker is the process of decomposition. Some 200-300 C degrees, that’s what I found in Wiki and other materials. Far from melting steel of course, but when most part of vessel’s insides is literally, on fire, for quite a lot of time, it definitely won’t make ship’s structural strength any stronger, is it? Taking all factors together, it can be summarized, that the bulk carrier’s hull is under tremendous stress for quite a time already, with as of now, unknown consequences for its’ structural strength. Even Spanish authorities will, I believe, recognize that fact.
CHESHIRE, by the way, was built by a Chinese Shipyard – note for those, who know the difference.

So again and again, we’re facing the question of public safety and the management of it, as presented by Spanish authorities. I can describe in detail numerous discrepancies and contradictions, already given by authorities, ship’s owner and salvage company – given, incidentally, not directly, but via media interpretations. But I won’t go into it, lacking time and space.
Summarizing it all, I, personally, still face the same unanswered questions – how safe is this salvage operation for Canary Islands? And what are the reasons behind authorities permission to carry out salvage in islands waters? Did they calculate all risks and found operation safe? On what basis?

I was contacted today by an involved into this story party, representing other party (just can’t be more specific for the time being), which party informed me, that I wrongly informed public by mentioning Bibby Line as manager:
In your report on MV Cheshire you mentioned that Bibby Line are the managers of the vessel, when in it is, in fact, V Ships in Singapore that are the technical and operational managers.
I have no objection to confessing my errors, though actually, I mentioned that Bibby Line only once, and only because everybody, all media, from major to industrial, were mentioning Bibby. I personally, don’t find the true identity of management company to be of much importance, at present stage. Managers may be aliens or Anunnaki, for all I care.
Also, I was informed, “that the cargo is an ammonium nitrate based fertilizer and not ammonium nitrate, which is very different substance”. On that one, I asked for explanation – does this difference make CHESHIRE cargo safer or totally safe from explosion? I was promised a detailed explanation, and as soon as I get one, I’ll publish it as it is.

P.S. As I was finishing my article, I received, via the party I mentioned above, official statement, issued by Bibby Line. It’s given below.

Subject: MV Cheshire
Liverpool, August 22, 2017
Bibby Line Limited, owners of the 56,597 dwt bulk carrier MV Cheshire, report an updated situation of the vessel, which experienced elevated temperatures in cargo holds 4 and 5 on August 12th. The vessel is loaded with a full cargo of fertiliser and is on passage from Norway to Thailand to discharge. The vessel arrived at around 15.00 hours on August 13that a safe position 45 miles south of Gran Canaria, as she was scheduled to stop in Las Palmas to take on bunkers. The authorities were advised of the situation and are offering assistance. The cargo manufacturer has also offered assistance and has sent 4 representatives to Las Palmas to advise on cargo cooling. Resolve Marine were appointed to attend the vessel and deal with the cargo problem.
Resolve Marine arrived in Las Palmas on August 14th, but in the meantime, the crew of Cheshire were evacuated and taken ashore for their own safety as wind conditions were so light that the fumes were not being carried away from the ship. A standby tug from SASEMAR stayed with the vessel and an access ladder was been rigged. The vessel has been drifting in a south westerly direction away from any landmass.
The crew are reported to be well and in a good condition and all except the second engineer, who will assist the salvors, have been flown home.
Resolve Marine have been on station alongside the vessel since August 16th but failed to get on board due to adverse weather conditions and the heat and fumes being generated from the affected holds. Holds 4 and 5 have now cooled down as the process of decomposition is believed to have completed, but holds 2 and 3 are still decomposing and emitting fumes, while hold 1 is presently stable. The salvors now have four tugs in attendance and they have been cooling the sides of the vessel with water, while the vessel continued to drift.
On August 21st, the salvors managed to get a tow line attached and the Cheshire is now under tow and heading towards Gran Canaria at a speed of around 3.0 knots. Vessel as at 0630 L 22/8/17 is in position 26 23.9 N 019 07.9W heading NE. The plan is to proceed to a position 50 miles SW of Gran Canaria.
Further information will be provided as it becomes available. 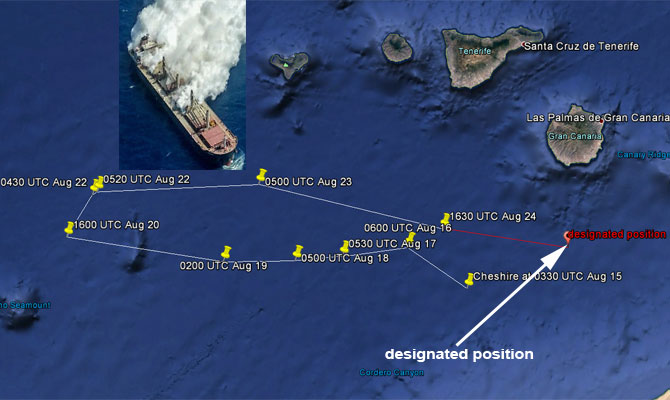