Bulk carrier CHESHIRE at 1600 UTC Aug 20 was drifting in vicinity 25 58N 019 14W, with SAR and salvage tugs RED SEA FOS, MIGUEL DE SERVANTES and VB HISPANIA nearby. The good news is, this ticking bomb is drifting in southwest direction away from Canary Islands, with already some 135 nm between CHESHIRE and nearest Hierro Island. The bad news are the rest of news.
On Aug 20, a number of Spanish media published official explanations and statements on CHESHIRE situation. On the face of it, they’re reassuring – situation is somewhat under control; helicopter is to deliver salvage team on board of CHESHIRE sometime soon; tugs are “cooling the vessel”.

Officials said, that helicopter is required, because vessel’s hull is too hot to board her from tugs. Yes, sure. But how come officials found out, that the hull is hot, on Aug 20, not earlier? Vessel’s on fire since Aug 13, incidentally.
Officials said, that tugs are cooling CHESHIRE with water from “a safe distance”. Where are close photos, then? Where are photos of tugs pouring water or foam on CHESHIRE from water cannons?
Look at two photos compiled in one pic, below, with clouds of yellow smoke. That big one seemed to be taken during Aug 14, shortly after fire started, and crew were evacuated. Other photos with lots of white smoke are all aerial. On a close-up photo with yellow smoke fire is, obviously, in one hold. In other, later photos, fire engulfed adjoining holds, and something is on fire in stern area.

CHESHIRE’s AIS is off since Aug 15, rather unusual thing, considering the fact, that there is no actual, or visible, fire, it looks like a chemical reaction going along with high temperature. Even if there’s fire, superstructure and bridge don’t seem to be affected. Why AIS is off? Was it switched off? If it was switched off, then we can’t but ask – why?

Maybe officials, along with salvage team and experts, just don’t know how to handle it all, what’s the chance of an explosion of all cargo or part of it, and what does explosion of more than 40,000 tons of ammonium nitrate looks like, what are the equivalents?

We do have an historical example, a case of Texas City Disaster:
The Texas City disaster was an industrial accident that occurred April 16, 1947, in the Port of Texas City. It was the deadliest industrial accident in U.S. history, and one of the largest non-nuclear explosions. Originating with a mid-morning fire on board the French-registered vessel SS Grandcamp (docked in the port), her cargo of approximately 2,200 tons (approximately 2,100 metric tons) of ammonium nitrate detonated, with the initial blast and subsequent chain-reaction of further fires and explosions in other ships and nearby oil-storage facilities. It killed at least 581 people, including all but one member of the Texas City fire department.
Full story: https://en.wikipedia.org/wiki/Texas_City_disaster

Those were 2,200 tons of nitrate ammonium, in Texas City explosion. We’re dealing with more than 40,000 tons. From a distance of 150, hopefully more, nautical miles, will it be nothing more than a fancy mushroom on the horizon, a rare opportunity to take fantastic pics and selfies, or will it be something harmful?
I am not an expert in explosives, I therefore, can’t say how dangerous it all is, but I dare say, if CHESHIRE changes direction of her drift and starts moving towards islands, and if danger of explosion remains, she must be sunk, as far off Islands, as possible. Though practically, that may be quite a problem.
If on the other hand, situation is under control and there’s nothing to worry about, let the authorities and salvors prove it, by photos and videos. Not a big deal, if of course, everything is under control. 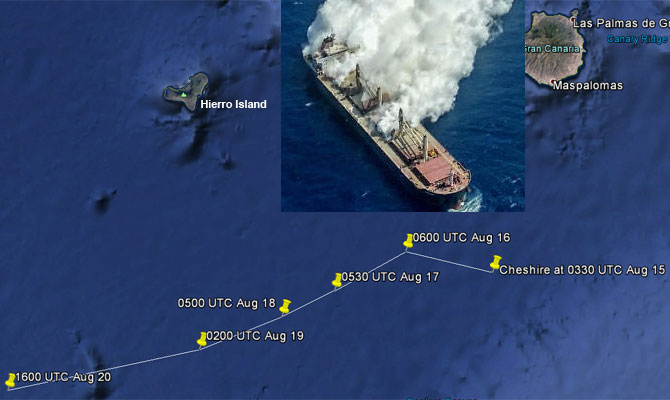 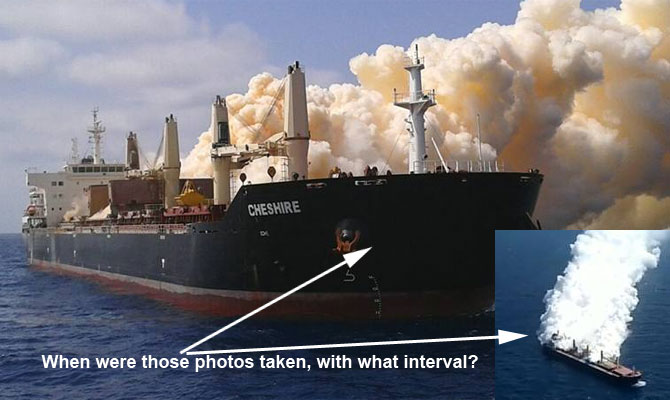 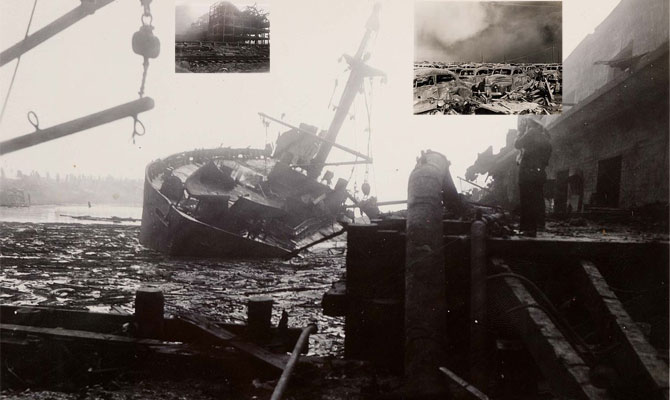