Bulk carrier CHESHIRE at 0200 UTC Aug 19 was drifting in vicinity 26 10N 01758W, some 95 nm south of Hierro Island, Canary Islands. Contracted salvage tug RED SEA FOS and SAR tug MIGUEL DE SERVANTES are nearby, two more tugs were sent to assist, offshore supply tug VB HISPANIA and Morocco-flagged port tug JACQUES 2, HB HISPANIA being already at the site as of 0200 UTC. Salvage team didn’t yet board burning CHESHIRE, and in all probability, won’t be able to board vessel someday soon.
Fire is absolutely out of control and growing, and it looks like nothing can be done even to try to take it under control, because of toxic fumes billowing from cargo hold, and because of danger of possible major explosion, considering the character of the cargo, ammonium nitrate, and its’ quantity. CHESHIRE in fact, is a floating bomb, loaded with more than 42,000 tons of explosives. Risk of explosion, most likely, is the main reason salvors can’t even pour water or foam on bulk carrier, using water cannons, from a distance which is considered, generally, safe. Not in this situation. As one of experts deployed in operation said, “we didn’t face anything like this before”.
There wasn’t any safe distance for passing vessels designated yet, no restricted area around burning CHESHIRE, but vessels are warned about the risk of a major explosion, and advised to give a wide berth. 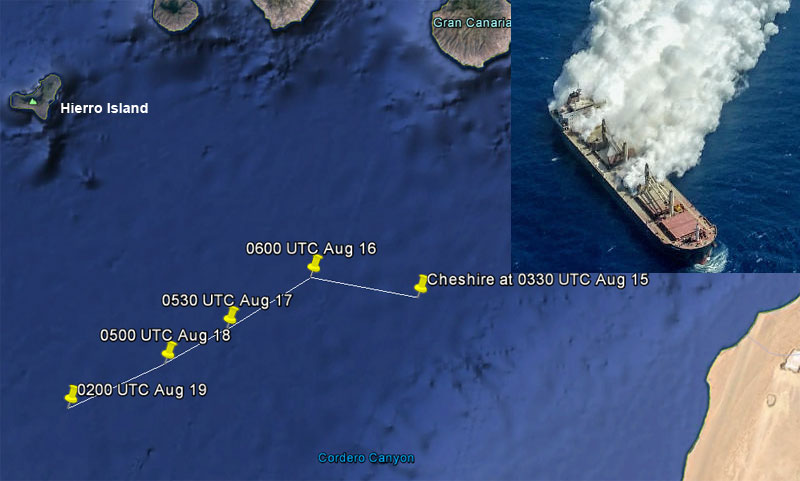